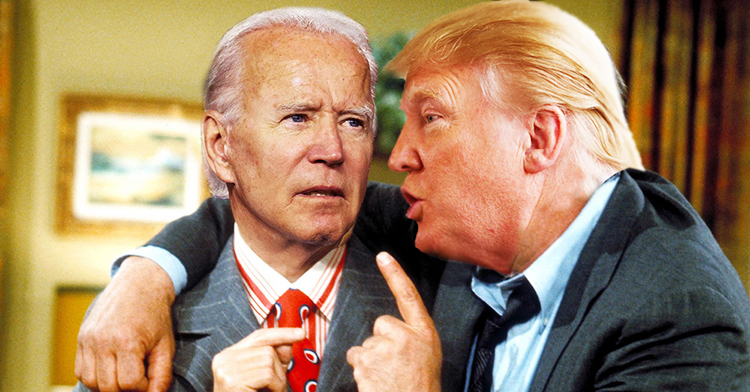 ALTHOUGH current President Donald Trump has yet to concede the election, despite allowing for the victorious Biden administration to begin a formal transition, reports are suggesting that he may be opening up to a ‘Felix & Oscar’ style 50/50 split for the next four years.

“Look, let’s just call it a draw, ” said Trump, while calling ‘dibs’ on his preferred half of the Oval Office.

“He won illegally, but ok, whatever. I say that he gets one half of the power, I’ll take the rest. I’ll take treasury, military, space force – he can have agriculture and all that other climate nonsense that he seems to love so much.  I’ll allow that, that’s just the kind of guy I am. Gracious in victory”.

With his suggestion being met with derision from the Biden camp, Trump fumed that ‘lots of other countries manage to share their leadership’, pointing at Biden’s ancestral home of Ireland as an example.

“Look at the Irish, what’s that guy called that came here for Patrick’s Day, little guy, Pence didn’t like him… Varadkar, that’s it” pleaded Trump, wondering if losing the presidency also means losing Air Force One.

“He’s sharing power with the other guy, what’s his name. Scared looking guy. Anyway, if they can do it, why not us? Even up in Norther Ireland, they’ve got a power sharing thing going on between the parties. Maybe that’s just the DUP, they seem like nice people. Biden on the other hand, he doesn’t even seem to want to try my idea. Loser!”.

Despite no reply from the Biden side, Trump is pressing ahead with labelling all his stuff so Biden knows what he can and can’t touch in January.