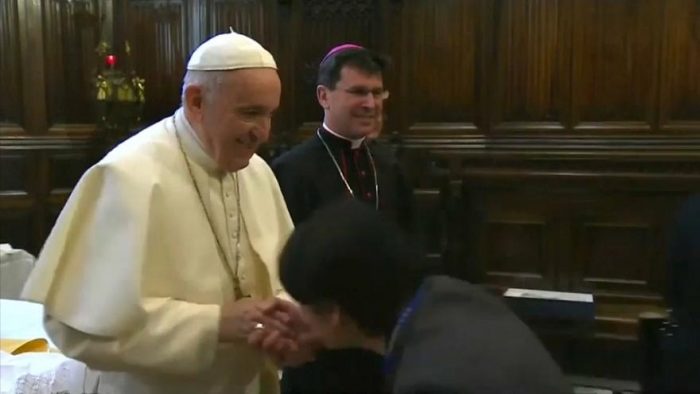 KEEN eyed fans of continuing to hold an organisation responsible for facilitating the widespread rape and abuse of children, have today made Pope Fancis’s continued inaction on child abuse go viral.

Not taken in by online publications attempting to make a brief video of the Pope retracting his hand from being kissed by worshippers ‘go viral’, people decided instead to make the Pope’s entire, ineffectual reign as the head of a backwards and archaic organisation go viral instead.

The Pope’s continued inaction on child abuse can be found hidden away deep in the online archives of reputable websites that mistakenly made the video of the Pope’s botched handshakes meme front page news.

Articles on the Pope’s dubious and insincere pledges to tackle child safeguarding issues went viral around the net, as did articles about sex abuse survivors who were promised a meeting by the Pope which he never honoured.

“Did you see that video of him with the hands and the ring kissing thing, that was gas,” confirmed one viral video and story watcher, “nearly as funny as the news emerging today that the Bishop the Pope was forced to replace in Chile over failure to act on child abuse allegations has been replaced by the Pope with another Bishop who has similar accusations against him. Gas. Lol. Classic viral content. Like and share, gotta love Francis”.