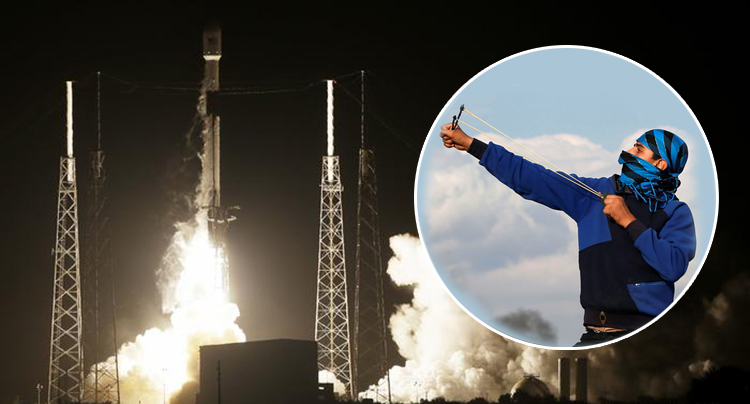 IN WHAT was to be a triumphant achievement for Israeli space exploration, the nation’s privately funded moon mission was quickly brought to a halt this morning after the rocket was shot down shortly after take off, WWN can confirm.

The non-profit SpaceIL spacecraft launched from Florida’s Cape Canaveral this morning in a bid to become the fourth country to make a soft landing on the moon, however, 97 seconds into the launch the rocket appeared to be hit by an unknown projectile before veering off course and exploding in the stratosphere.

“The rocket appears to have been taken out by a Hamas missile of some sort,” alleged Israeli investigators working on the project.

Further investigations by NASA found several young men wearing Palestinian flags and head scarves had been loitering outside the Cape Canaveral perimeter at the time, brandishing makeshift catapults and a menacing air about them. On closer inspection, CCTV footage showed the men firing rocks at the $100mn Falcon 9 rocket before it wobbled off course and self detonated.

“No, it was definitely a Hamas rocket,” Israeli Prime Minister Benjamin Netanyahu insisted in a post-launch press conference, now promising a series of airstrike’s on Palestine as retaliation for destroying the moon mission.

This is the second failed Israeli moon mission after a similar launch outside Jerusalem in 2012 was taken out by Israel’s own self defence system as their own rocket tried to leave the Iron Dome.

“Yes, that was our own fault for not turning off the bloody thing during takeoff,” Netanyahu admitted, “it can be a gift and a curse at the same time”.