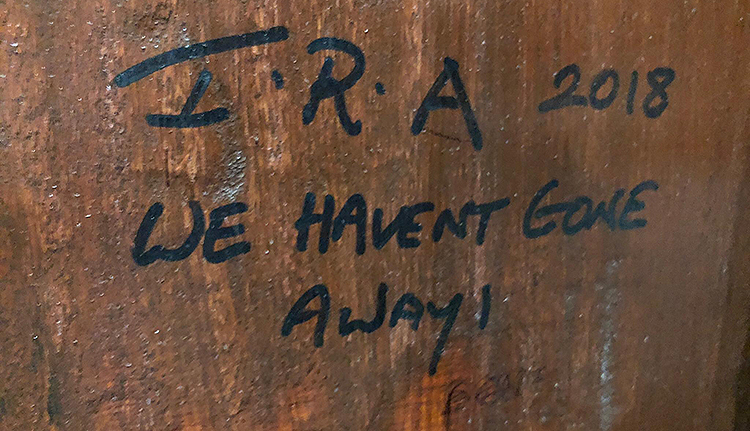 IN A week of high tensions and uncertainty surrounding Brexit and how it will affect the Irish border with Northern Ireland, the Irish Republican Army (IRA) has issued a worrying new statement this week on a toilet door of a well known Dublin pub, WWN can confirm.

Using what appears to be a permanent black marker, a spokesman for the paramilitary organisation penned a chilling but albeit short note on the back of a cubicle door in the gents bathroom of The Canary House bar in South Dublin.

The warning, which read “I.R.A 2018 We havent gone away!”, was spotted by surprised customer last Sunday evening shortly after he sat down to evacuate his bowels.

“I’d say I just missed them by seconds,” recalls a Canary House regular, who wished to remain anonymous, “I had no idea they were still around to tell you the truth; I thought they had gone away”.

Staff at the bar reported the find to gardaí and an armed response unit was deployed to the bar for fear the IRA may be hiding somewhere on the premises.

“You’d think you’d spot a group of men wearing camouflage and balaclava’s going in and out of the jacks,” barman Conor Walsh told WWN, “but none of us here seen anything like that.

“They’re obviously very well trained and were in and out in a flash”.

The eerie statement, which shadows over other various statements about penis sizes and how bad Liverpool FC are, is one of just hundreds of similar IRA messages left by the organisation in Irish bars, raising fears over the current brexit negotiations.

“This obvious threat to peace could break down talks with the UK over a hard border,” Taoiseach Leo Varadkar pointed out after visiting the toilet earlier today.

Meanwhile, Sinn Fein have since rubbished the find, stating it was probably written by members of the UVF trying to reignite tensions in the North.