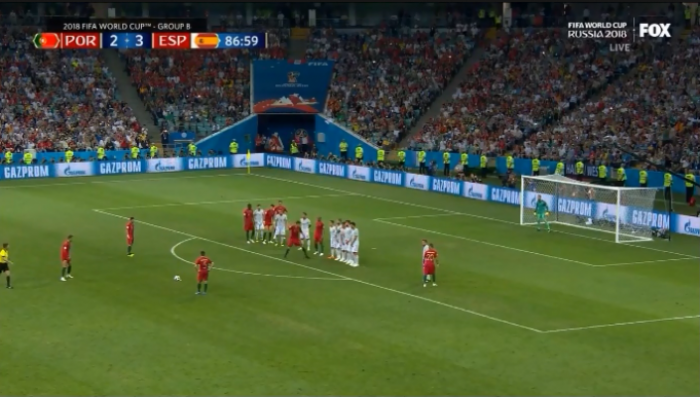 WWN brings you the latest for Russia 2018.

Please patient as we trudge through to the boring stuff or just skip forward for the Ronaldo stuff.

Much of Egypt v Uruguay was spent waiting around for Mo Salah to make an appearance and such was the devotion of the Egyptian fans in the stadium toward Salah it would make rabid boyband loving teenage girls blush with embarrassment.

As the game progressed and it was clear Salah would not appear, the internet was awash with shoulder injury experts happy to speculate on the psychological status of his mentally fragile shoulder.

A fairly non eventful game sparked into life when Uruguay defender Jiminez scored a header in the 88th minute rising like a high rise apartment in Dublin City that wasn’t refused planning permission for some inane fucking reason, sparking a pile on from the Uruguay bench which resembled a particularly violent birthday bashing.

Morocco v Iran was proof if ever it was needed that if you want witness majestic brilliance like Maradona’s goal against England in 86 then you have to sit through some awful shite football first.

The pain was alleviated somewhat by the high concentration of handsomeness with Morocco’s manager and Jamie Lannister’s stunt double, Richie Sadlier on analysis, the whole Iranian team and Brian Kerr’s sultry tones – which sound like a kestral dipped in honey.

The match between two teams the average fan would have seen and heard very little of before, represented the perfect opportunity for your coworker or Whatsapp group member to regurgiate one or two facts they half-remembered from a podcast they listened to in the build up to the tournament.

Morocco and Iran did partake in one goal mouth scramble in the first half which was for the ages, with more limbs flailing about aimlessly than an accident at the annual international convention of octopuses. Some Moroccan lad then scored an own goal.

Now the for main course.

Spain’s new manager Hierro was literally parachuted onto the bench before kick off against Portugal as is custom for last minute managerial replacements.

It was a case of ‘new haircut, new me’ for Ronaldo as he sought revenge from the Spanish tax authorities after they fined him 18.8 million and handed him a two year suspended sentence for tax fraud.

“Oh yeah, thanks for getting him fucking angry” the Spanish team remarked after the full time whistle, in the wake of Ronaldo well and truly twatting a ball at great speed into the net from a free kick in the dying minutes.

Earlier Diego Costa channeled his inner bustling bastard to steam roll Pepe who did what all great defenders do when challenged by collapsing to the ground clutching his face, however thanks to Ronaldo’s hattrick and a rare De Gea mistake which proved not only does he vaguely look like sloth, he occasionally has same reaction speed as one, the game finished 3-3.

Today’s action sees a total of 97.5 games on Super World Cup Saturday, with Lionel Messi in action. If Messi fails to score 8 goals against Iceland in the first half he will relinquish the title of world’s best player and suffer abuse for 12 year olds in the comment sections of YouTube football compilation videos.