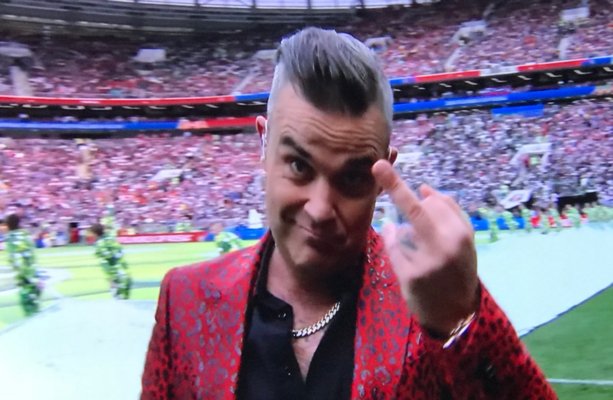 WWN and dedicated team of reporters in Russia will be bringing all the latest from the World Cup groups stages and beyond.

After an opening ceremony that was best viewed after dropping some acid and ignoring Robbie Williams, and the fact he was tastefully dressed by his blind Aunt as a full blown mid-life crisis, all that was left was to put foot to ball and get World Cuppin’.

FIFA’s press team have confirmed any resemblance of FIFA president Gianni Infantino’s head to a penis is purely coincidental.

Russia edged out Saudi Arabia by five goals in their crunch ‘Homophobia Derby’. Or for those of you watching the action on the RTÉ Player; the large red pixels which kept jumping and freezing beat the green pixels which kept freezing in between the connection completely dropping out before Eamon Dunphy had a chance to prove how little he knows about football these days.

Many fans were outraged as it took World Cup cameramen 45 agonising seconds after kick off before they diverted their lens towards attractive women in the crowd. In the 2014 tournament in Brazil, it only took 12 seconds, let’s hope this worrying trend doesn’t continue.

The goals soon flowed as Yury Gazinsky opened the scoring with a header, four more goals followed as the Saudis began to get that sinking feeling. It is believed if the team’s poor form continues the Saudi authorities would make an exception to the current law and execute the team on return to their homeland, even though none of the squad are openly gay.

Truly sublime goals from Cheryshev and Golovin insured that while you bitched and moaned about geo-political issues involving Russia in Crimea, Saudi Arabia committing war crimes in Yemen, off the pitch, the kids on your roads would be hoisting their jerseys over their heads and wheeling away in wild celebration, imitating the stunning goals that had them glued to the TV.

The highlight will of course be Portugal v Spain, which will pit the immovable prick that is Ronaldo against the unstoppable bastard Sergio Ramos. Other fans will be keen to watch Uruguay though as Luis Suarez aims to build on his legend, can he top his blatant handball against Ghana in 2010 or his cannibalism in 2014? Mo Salah’s shoulder remains under armed guard as a precaution.