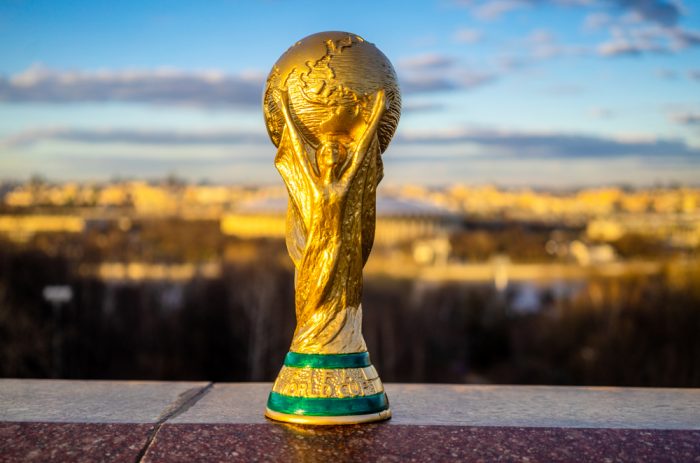 ENTERED into an office World Cup sweepstakes draw? Facing the prospect of being forced to watch game after game by your partner, housemates, friends or family? Or have you oversold your football knowledge in bid to fit in?

Check out WWN Sport’s 15 essential World Cup facts you can use to impress everyone with, sounding like the ultimate expert in the process.

1) Despite the name, the world has never fitted easily inside a cup.

2) A total of 64 matches will be played across 30 days, with 32 teams consisting of squads of 23 players each, meaning that at least one player is bound to get a football hoofed square into their testicles live on TV in front of an audience of millions. And that’s never not funny.

3) Russia is hosting this year’s tournament and kick things off against Saudi Arabia. Russia are the favourites for the game but they did lose the prematch ‘who hates the LBGTQ community more’ match, with Saudi Arabia’s use of the death penalty for practicing homosexuals shading this one.

4) Russia 2018 becomes the first ever World Cup were teams will be awarded 3 points if they just agree to stop fucking diving.

5) England qualified as the token ‘comedy’ team for a 7th World Cup in a row. However, there is considerable worry among football fans that this England team might actually be harmless and likeable.

6) Brazil hold the most World Cup wins at 5, however, Ireland’s ‘you’ll never beat the Irish’ chant trumps such achievements. With no Irish team at this year’s tournament, it can already presumed the World Cup will be shit.

7) It is important to ignore all people proclaiming to be ‘experts’ who approach you with their betting tips for top goalscorer at the tournament.

8) Many people cite Zinedine Zidane headbutting Marco Materazzi in the World Cup final as the stand out moment in the history of the competition. However, watching Maradona, coked off his head, screaming and running towards the camera after scoring a goal during USA 94 is better.

9) The beautifully melodic vuvuzela, the star of the World Cup in South Africa in 2010, remains the greatest instrument on earth.

10) The distinctive and iconic World Cup trophy is a replica of a drawing by former FIFA president Jules Rimet, who thought the trophy is exactly what playing football looks like when you’re high as a kite.

11) Russia 2018 is the 21st World Cup, with the first ever tournament taking place in 1930, but the format was very different back then. Hosted by Uruguay, it was contested inside the sports hall of a secondary school, and played by mostly overweight 40 year old dads, who were prone to taking everything too seriously.

12) Before starting to enjoy the World Cup, prospective fans are required to take sides in the eternal war between fans of Lionel Messi and Cristiano Ronaldo. Violent clashes at the last World Cup claimed 347 lives.

13) The elaborate opening ceremony to the tournament is set to feature a segment on Russia’s greatest state-sanctioned assassinations. However organisers are worried that at 8 hours, the section may be too long.

14) The World Cup is the biggest sporting event in the world, which means aside from bringing immense joy to children around the world, it is also a great opportunity for corrupt businessmen and politicians to line their pockets.

15) 17 North Korean slaves were killed during the construction of Russia’s World Cup stadiums, but hey the Brazilians are looking pretty skillful this year.