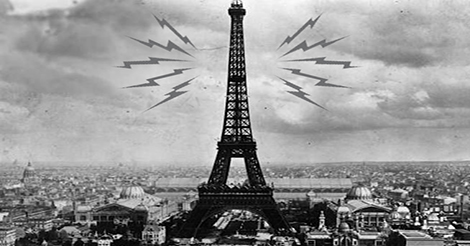 THE Eiffel Tower was designed in 1888 by inventor Gustave Eiffel and constructed a year later in Paris to help detect the rampant rise of homosexuality in the French capital. It later became known as the world’s first ‘gaydar’ system with a 95% accuracy rate.

At the time, homosexuality was a crime punishable by death in France and reached epidemic proportions right throughout Europe, forcing governments to act out before the population dwindled from the lack of procreation.

Financed by the president Marie François Sadi Carnot himself, The Eiffel Tower quickly made the news in its first week of operation after it located over 3,567 gay’s living in Paris, aiding the local police with their capture.

In just two years after its erection, the world’s first gaydar reduced the homosexual population of Paris from 28%, to just 0.05%, a feat unrivalled, even by today’s standards.

Collecting the Nobel prize for science and innovation in 1894, Gustave Eiffel hailed the tower as one of his greatest achievements, but couldn’t help feeling sorry for the hundreds and thousands of homosexuals who were tried and put to death, thanks to his invention.

“This invention of mine comes as a bitter pill for me,” he was once quoted as saying in a French newspaper. “Many good friends and people were lost as a result of my work and I will take that pain with me to my grave. However, this Nobel prize part-fills that empty void in my soul and I couldn’t have imagined the sheer success of my gaydar system. I’m conflicted and humbled by this honour”.

It wasn’t until 1984, when homosexuality finally became legal, that the Eiffel tower gaydar system was finally switched off by serving president at the time, François Mitterrand, put an end to the draconian system which saw over 4 million homosexuals put to their death over the antenna’s 95 year operation.

Today, The Eiffel Tower remains as a tourist attraction, which sees millions of mourners flock to the site every year in a bid to never forget those innocent people who lost their lives.