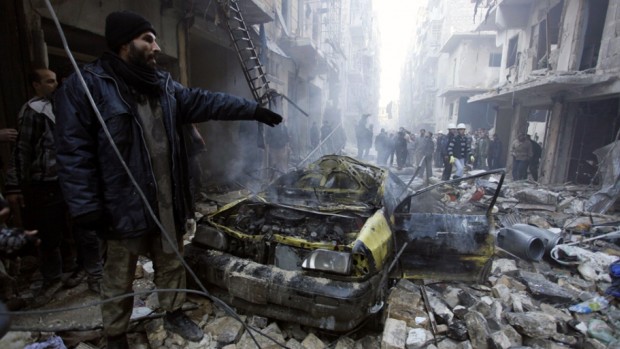 THE comfort and space of a saloon car makes it the ideal car for most families, but how does the average 4-door stand up to being hit by a 500lb Paveway laser-guided bomb dropped during a coalition airstrike? We went to Syria to find out.

The average 2 litre diesel may be fine for mid-range journeys such as the school run or picking up the latest relative to be injured by a suicide bombing from the hospital. It lacks the va-va-voom to get you out of trouble when British planes begin a bombing run on your neighbourhood. By the time you hear the panicked screams of the people in the supposedly rebel-held apartment beside you, it’s too late; your car just doesn’t have the instant boost of speed needed to save you and your family from being buried under an avalanche of masonry. 2/5.

Dual front airbags, side impact protection, anti-lock brakes… most family saloon’s these days have a range of safety features designed to keep you and yours nice and safe in the event of a frontal, rear or side collision. Of course, none of this helps when a team of military experts on the other side of the world decides that the neighbourhood you live in may be an ISIS training camp and unleashes £800,000 of ordinance on top of you. Did some one get the licence plate of that RAF Tornado? 1/5

A regularly serviced, neatly kept family saloon is a much sought-after, easily sold vehicle which should retain much of its original showroom value. Until of course you’ve been driving it in a land torn apart by years of war –  then it takes a pretty sharp decline. A Volkswagen Passat that got on the wrong side of a Brimstone missile is worth just 0.0000001% of its initial cost! Ouch! 1/5

If you’re a regular Syrian civilian looking to buy a car that can take you to and from work, pick up the kids from school, and live in an area which is regularly subjected to heavy shelling by people trying to “free you from terrorism”, then a standard family saloon may not be for you. Perhaps you should consider something with a bit more pace, or maybe just flee for your life to another country with only the clothes on your back.