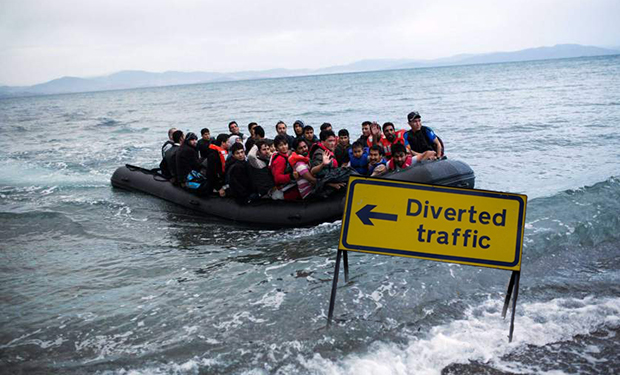 REFUGEES fleeing the wartorn state of Syria were greeted with a series of diversion signs to the US in a desperate bid to stem the flow of people flooding the European Union seeking asylum.

At a meeting on the crisis in Luxemberg, European Union foreign ministers decided it was best to erect the signs following a lengthy debate on what to do with the sheer volume of Syrians entering EU territories, which saw over 100,000 reach its borders last month alone.

“Can the Russians not take them?” Hungary PM Viktor Orbán suggested. “They have plenty of space there and I’m sure Mr. Putin won’t mind; he seems to love taking on large populations of people lately.

“We can’t keep them here: it’s bad for tourism,” he added.

“The Russians will only put them to work in the military,” British Foreign Secretary Philip Hammond MP pointed out. “How about our friends in Saudi? The males can help build some skyscrapers or something. We can ship them back on the oil tankers. Money ain’t bad there either… Plus, they all speak that language over there, whatever it is”.

Later rubbishing both requests, the EU foreign ministers voted unanimously to a previous suggestion made by Irish foreign affairs minister Charles Flanagan, who mentioned sending them to the United States, stating that the yanks “seem to be very quiet on the subject, despite being a major contributor to the current conflict”.

“Yeah, fuck it, send them to the US,” several ministers agreed.

With that, a decision was made to erect thousands of diversion signs along the 10,745 km route to the US from Syria with an estimated travel time of 5 months in a dinghy, or three weeks on one of the many thousands of oil tankers leaving the region for America every day.