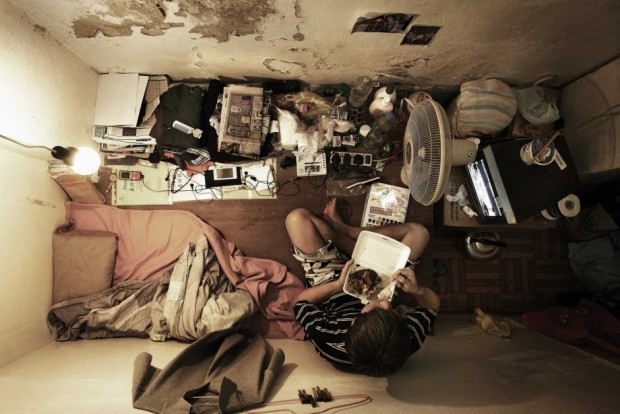 WITH the first round of CAO points released this week, many excited young men and women have set about the task of finding themselves somewhere to live while they attend the college of their choice. For most of them this will be the first time they’ve stayed away from home for any length of time, so they may not be certain as to what to expect from their new digs. Here’s a helpful guide to finding the right place for you!

Take the first place you can

Demand for student accommodation has grown faster than the market can meet, generating a tremendous shortfall in places for young people to stay. So if you see a flat that’s available, take it. Don’t ask questions, don’t ask to have a viewing, don’t even check if it’s suitable or in a safe area: just grab it with both hands and pay the landlord whatever he wants. If you blink, you miss it. It’s a cockfight out there.

The landlord will sort out any problems you have

If there’s anything wrong with your new flat, be sure to say it to your landlord. Whether it’s a security issue, heating, damp, lack of basic facilities… your landlord is there to help. He may not do it straight away, or indeed at any stage during your stay, but rest assured that he is aware of the problem. Be advised that informing your landlord of a problem with his flat will immediately negate your security deposit, regardless of whether or not he fixes anything.

Maybe don’t leave anything nice in the flat

It’s great that you managed to get accommodation that’s only two hours and three bus changes away from your college, but you can’t help but feel concerned about some of the less charming aspects of the neighbourhood. There sure does seem to be a lot of shady characters hanging around all the time! Combat this by never leaving anything of value in the flat: your laptop, your phone, a TV, kitchen utensils, nice toilet roll, clothes, college material, pretty much anything that isn’t nailed down. Buy a large rucksack and cart everything around with you all day.

Get to know your flatmates

You’re bound to meet some craaaazy characters while living the student life, so be sure to take the time to really get to know the people you share your flat or house with. Granted, you’re pretty sure at least one of them is stealing from you, the place constantly smells like the inside of a bong and none of them seem to realise how much noise they’re making while they’re fucking the brains out of some stranger they just met in a room that’s separated from yours with the thinnest walls imaginable, but they’re just young people having fun, like you! Even though you’re not really having fun, and you sleep with a knife under your pillow most nights.

If you’re feeling homesick, just remember that this won’t last forever. Pretty soon you’ll quit the college course that you were so sure you wanted to do, mainly because you can’t stand living in a dump that you’re paying a grand a month for, existing in constant fear of being assaulted or robbed on a daily basis. Maybe you can come back later in life, when student accommodation is better regulated or the supply has caught up with the demand. It’s right around the corner, we’re sure.