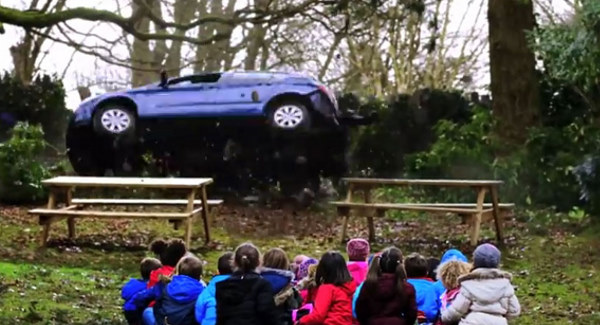 MOTORISTS across the country are today calling for the banning of children’s picnics, following the latest ad campaign from the Road Safety Authority.

Deemed too graphic to be shown before the watershed, the new advertisement went viral yesterday and prompted thousands of motorists to take to social media to voice their concerns, including Dublin man and provisional license holder Niall Whelan.

“Motorists have a tough enuf time without havn 2 worry about childrens picnics as well” tweeted Whelan, on a journey from Dublin to Naas. “So if I crash and ders laods of kids and I kill dem, thats my fault?!?! Gey! It’s obvs kids won’t be safe if dey r eating beside d road! #BANPICNICS!”

Mr. Whelans views were backed up by thousands of drivers using the BANPICNICS hashtag, including one girl who claimed that just viewing the video on her phone made her nearly swerve into the path of an oncoming bus.

The outcry calls to mind a similar incident in the late nineties when hordes of drink drivers successfully lobbied for the banning of Fleetwood Mac songs on the radio following a shocking ad by the DOE.

Speaking on behalf of the Drivers Rights Association, Jennifer Constantine urged parents to stop putting their children in gardens with crustless ham sandwiches, a bag of Monster Munch and a Cadet orange bottle filled with Mi Wadi.

“We all agree that there are too many deaths on our roads” said Constantine, referring to the depressingly consistent yearly statistics of death and injury on Irish roads.

“So to keep them to a minimum, we’re going to need people to keep their kids indoors as much as possible. If they’re not beside the road, they won’t get hurt. And it’s not just kids; there was an ad last year that showed a motorist swerving to avoid a dog on the road, crushing two teenagers in the process. Maybe we should ban dogs as well”.

Earlier the RSA advised parents and child minders not to overcrowd picnic tables with young children. Just in case.