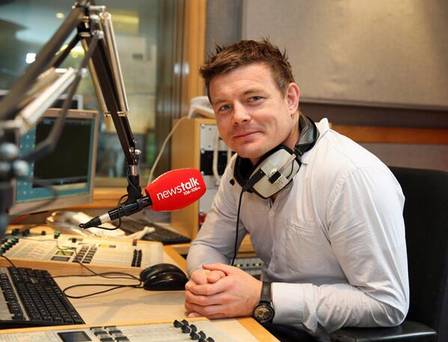 RECENTLY retired Irish rugby player Brian O’Driscoll said today that he is looking forward to putting on loads of weight and getting paid for “talking shite” on radio in a new career step towards sports commentating.

News was announced this morning on the Pat Kenny Show that the 35-year-old is joining Newstalk as a rugby pundit and co-presenter on Off The Ball.

“I’ll probably pile on the pounds now like all the rest of the retired rugby lads,” said O’Driscoll. “Hopefully I’ll get a good few years out of Newstalk before being picked up by a proper paying broadcaster, like Sky Sports. I’ll be like the new George Hook – riddled with gout and getting paid for my general observations on rugby games.”

O’Driscoll spent the last six months of his career retiring as a two-time Six Nations winner with Ireland, having captained the side for nine years. Since January this year he has played 23 “final matches”, eventually forcing him to actually retire last week.

“Some people say I milked the whole retirement game thing. ” he agreed. “But didn’t I deserve it? Didn’t I make Ireland the team it is today?”

The Dublin born native also pointed out he won the Heineken Cup with Leinster three times, as well as being part of all four of their Pro12 championships, and he also lifted the Amlin Challenge Cup last year.

“I’m actually a legend when you think about it.” he concluded.