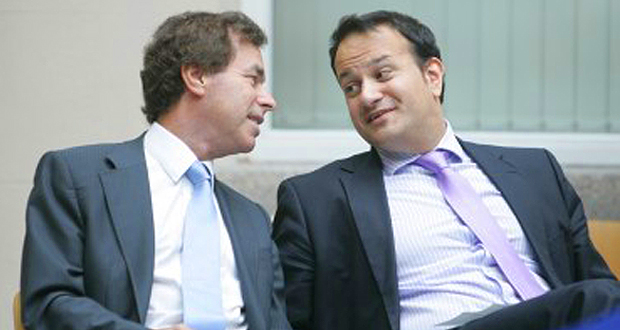 MINISTER for transport Leo Varadkar said he will promise to meet up with ousted Justice Minister Alan Shatter for a pint sometime, “when all this politics stuff was over”.

Mr. Varadkar made the pact shortly after lunch time yesterday, when the two men met up for the last time in Leinster house.

“Sure, you won’t know yourself now Alan.” stated the 35-year-old. “You can start the sequel to that steamy novel you’re always on about. I’m actually jealous now. You’ll have great craic altogether. We’ll go for scoops when all this is over.”

“Call me.” he added whilst making a telephone gesture with his hand.

A dishevelled Mr. Shatter nodded in appreciation for the gesture before asking his colleague to give him a hand with some boxes.

“No, seriously Alan, me and the lads will give you a shout during the Summer holidays. It will be like old times.” he reassured. “I’ll book us into the K-Club. We’ll have a right old send off.”

“The place won’t be the same without you.” he added. “And remember, don’t go opening any suspicious parcels.”

Unaware of his attempted joke, the former justice minister loaded his boxes into his chauffeur driven car for the last time.

“Sure if not the Summer, then Hanukkah?” shouted the transport minister while following the departing car.