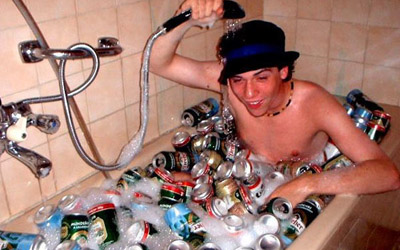 WHILE many Irish people sought to engage in outdoor activities such as hill walking, a trip to the beach and playing sports the vast majority of the Nation ensured Ireland kept its long running streak of going mental of a weekend.

Statistics made available to WWN by the Institute of Studies reveals that this bank holiday weekend was the 936th weekend in a row during which the country failed to drink responsibly.

“It continues to baffle us to be honest,” shared researcher at the Institute of Studies Tom Merchant, “we have gone over the figures countless times and found no errors. It appears 11 out of every 10 people were off their nut on the sweet nectar of alcohol during the weekend.”

Experienced drinker and man about town Billy Richmond disagreed with the findings of Merchant and his team.

“2005, New Year’s Eve fell on a weekend and I didn’t drink so I think this stuff is bullshit,” explained Richmond, speaking from his living room sitting atop of a throne made out of discarded Dutch Gold cans.

“The majority of my furniture is made out of cans if I can be honest for a moment. Yeah, I didn’t drink, but that may be because I was in a coma for the two weeks after Christmas,” shared Richmond.

The drinker then went on to discuss his plans to add a shed made from cans to the back garden after the June bank holiday.

On a political level little noise is being made about the effort to keep the Nation from sobering up despite record number of Irish males finding themselves trapped in wheelie bins after a night out.

“If they didn’t drink there would be a real danger they’d mobilise and protest. Plus, there is an element of pride in this streak, we’re only 2 weekends away from breaking the previous records held by of all places Ireland in the early 80s,” shared a government official.