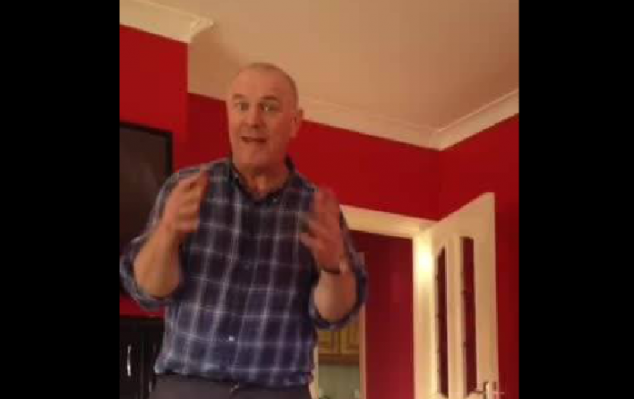 The last few weeks have seen social media websites such as Facebook, Twitter and Instagram flooded with controversial videos of Irish fathers being used as comical cannon fodder.

This morning a number of TDs called for an end to this troubling trend, with several of them making impassioned pleas to the children of Ireland to cease this practice.

The videos are believed to be part of a growing online game played by young people, which sees them video their fathers engaged in all sorts of carry-on. By filming them 24/7 it is hoped that at some point a father will do something worthy of being posted.

Leading sociologist Dr. Emma O’Reilly spoke to WWN about the possible reasons behind these videos. “It is well documented that Irish fathers have an unparalleled capacity for embarrassing their children. This film-your-dad trend is a reaction by those children who have been embarrassed far too many times. It is a reappropriation of this father-child relationship, the subjugated now becoming all powerful.”

One popular video exclusively posted on popular Irish website TheDailyEnterJoement.ie showed a seemingly normal father burst into song and dance. It is this video which TDs focused on most closely in an intense Dáil debate.

“This is madness, it is very clear from the footage he is not wearing suitable dancing shoes,” remarked Independent TD Peter Matthews. A very emotional Fianna Fail TD Niall Collins called on the government to take action.

“Something needs to be done before it’s too late. Many of these fathers have jobs and lives, if these videos were to be widely circulated their employers could fire them on the spot.”

WWN research can exclusively reveal that 1 in 3 Irish fathers are currently being filmed by their children in the hope that their ‘loltastic antic’ will go viral.