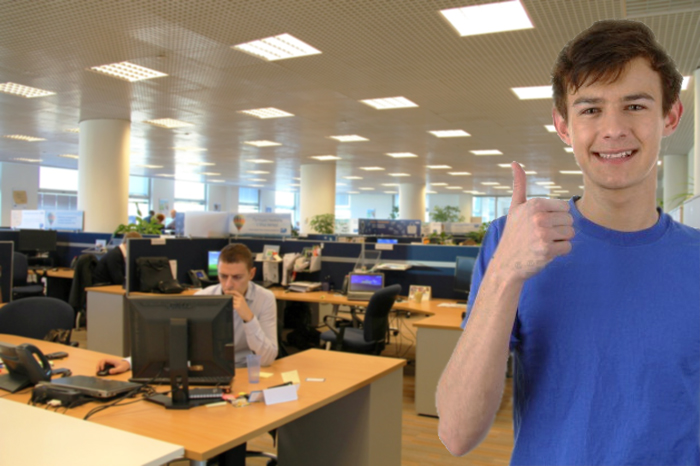 Kevin Murray’s future at the coalface of 21st century journalism hangs in the balance after he finally presented himself at work this morning.

The media studies graduate was expected to arrive at the offices to clean the toilets last Thursday at 6am but his failure to do so confirmed a number of suspicions his co-workers had of him.

Terry Bull, WWN’s fashion correspondent is said to be perplexed and even annoyed at the unprofessional behaviour of the ungrateful intern.

“We’d do anything for a job in my day, he just doesn’t have the work ethic and it’s about as disrespectful as you can get,” said Bull of the masters graduate who is working 80 hours a week.

Kevin, arriving in tattered clothes and appearing as if he hadn’t washed gave rise to comments from fellow coworkers who speculated he had ‘too good of a time on holidays’.

It is rumoured Kevin’s absence has left WWN head honcho Colm Williamson enraged with the editor going as far as to ring the social welfare office 37 times to report the JobBridge intern’s unprofessional behaviour.

“Where else would a masters degree graduate get to be a receptionist, cleaner, office manager and car valet? He better have a mighty apology lined up,” WWN’s editor-in-chief is believed to have said.

Mr. Williamson took the decision to move Kevin’s desk back into the staff toilets in the hope that the JobBridge intern would recognise the error of his ways and seek to prove himself to WWN.