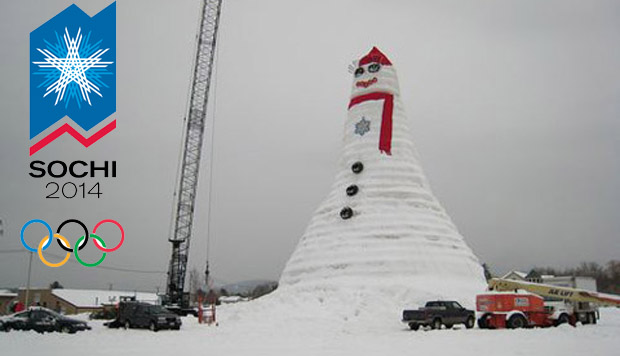 While the 2014 Winter Olympics has been at the centre of controversy, Ireland found cause to be inspired by Dubliner Duffy’s 3rd place finish in one of the games most prestigious events.

“Ah I did it for the fans back home, thanks to everyone for their support,” an emotional Duffy said when speaking to WWN.

“Everyone knows how close I came four years ago, and to come back and get the bronze I’m so proud of myself,” the athlete said smiling from ear to ear.

“No one needs telling how important the nose is in international standard snowman building competitions and that’s where I’ve improved my game over the last few years,” a candid Duffy told out reporter.

Duffy credits the recent harsh winters at home for affording him that precious practice time with snow.

“I’ve not been able to afford training abroad so I used to just scrape out the freezer at home but with the horrible last few winters there has been an abundance of snow available to me. It’s great!”

Duffy’s choice to drape a scarf on his snowman along with giving him a pipe is believed to have impressed the usually hard-to-please Olympic judges. Duffy secured his bronze medal at the expense of snowman building legend and Ukrainian icon Dimitar Nabukov.