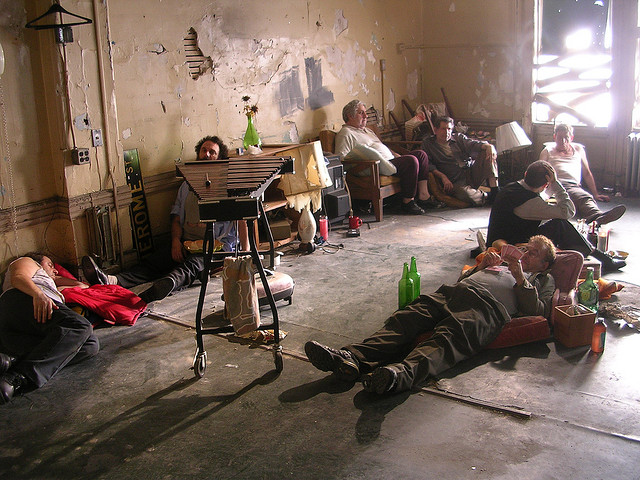 ANGELIC, enchanting and pulchritudinous were just some of the words used by user Martin ‘Nailers’ Johnson when he described the new €7.34 makeover.

Nailers has revealed that he consulted with a well known Chinese feng shui expert before rearranging the ‘spent’ residence, tilting the scarface poster several degrees and setting up a ‘no smoke zone’ in the attic as result of the advice.

“Its all harmonious and shit now.” he explains. “Before it was all over the place and it was giving us bad vibes.”

The users at the den were so troubled about positive energy flows that the double mattress was eventually orientated to face the broken window with the rear of a local hotel as a backdrop. Several rolls of tin-foil were also bought and strategically placed in a south to north direction around the main smoking room.

The Feng shui expert designated ‘no smoke zones’ in the attic, to try to keep the five elements of glass, water, ash, fire and crack cocaine in balance.

“Ya, its wickid mate. We is already feelin it, know wha’ a mean bro. We’s all happy and shi’. The bouys be laffin all the times. We runnin it bro, runnin it.” said London born user Buba’s Walsh in an interview with this reporter earlier today.

Smack heads tend to be absent-minded and lackadaisical, but Nailers crew has broken the user mould.

The new den situated in the heart of Waterford city is expected to draw in droves of new users from neighbouring communities, such as ‘little Warsaw’ and the Glen.

However, the crews cultural sensitivity drew a huge backlash recently when a long time user and friend of the group was recently arrested for cat prostitution on Thomas street.

The man, who cannot be named for legal reasons, was caught in a sting operation when he tried to pimp a stray ginger cat to an undercover detective for the purpose of sexual exploitation.