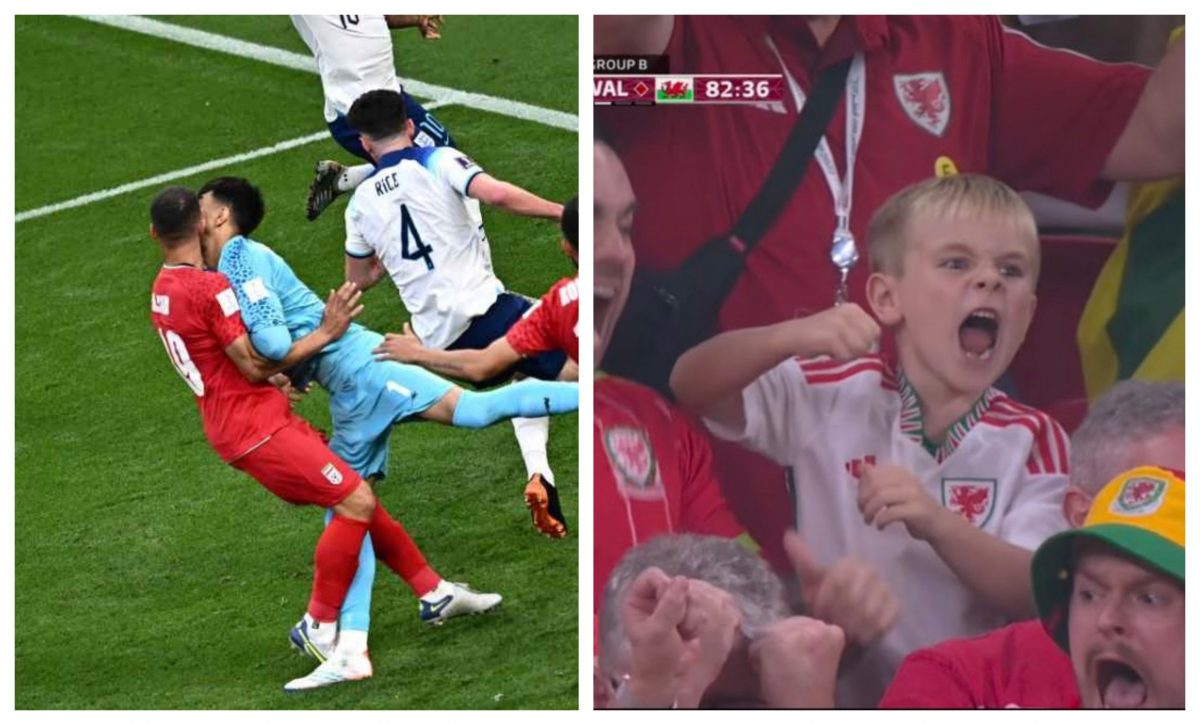 In an act of bravery the Iranian team refused to sing the national anthem during ongoing unrest in Iran. In similarly brave scenes, Harry Kane decided against wearing a rainbow coloured ‘One Love’ armband due to the threat of receiving a yellow card.

It was an understandably emotional game for the Iranian team at a time of great unrest in their country, however, they’d still take that over Brexit.

Iranian keeper Alireza Beiranvand was so heavily concussed in an early head clash he was convinced FIFA awarded Qatar a World Cup in the middle of winter.

Replays of the clash showed the keeper and teammate Majid Hosseini making head to head contact, prompting Qatari authorities to charge the men with engaging in homosexual activity.

Jude Bellingham scored his first goal for England with a glancing header causing Liverpool fans to weep in the knowledge he’ll now cost at least £150mn.

Despite the unfolding goal fest there have been more enlivening atmospheres found on the surface of the planet Mercury.

3-0 down at halftime and floundering, Iran manager Carlos Queiroz responded by trying sub their concussed goalkeeper back on.

Saka scored a second goal to make it 4-0 as the stadium witnessed the worst defence since Rebekah Vardy took the witness stand.

Jack Grealish scored England’s sixth, with historians remarking that the last time the English hit this many in Qatar was when the East India Company bombed out Doha.

The game ended with Mehdi Terami scoring his second goal via a penalty after John Stones tried to swap shirts before the full time whistle.

Under pressure and out of form Harry Maguire earned wide praise from English pundits for performing about as well as the human rights charter in Qatar.

Fun fact: The massive world cup trophy replica on the pitch at the start of every game is made from melted down filling of migrant workers.

Despite the stadium being half empty the ‘official attendance’ for the Senegal v Netherlands game was 41172 which is actually 1172 over the capacity just in case you were wondering if you can trust Qatar’s official figures on other things, such as migrant deaths.

An engaging first half gave way to a second half of turgid football harder to watch than Matt Hancock trying to fake human emotions on I’m a Celeb.

The boredom was broken by a nice cross from Frankie De Jong that found its way onto Cody Gakpo’s head who opened the scoring. Klassen scored the Netherland’s second, proving once and for all that prematurely balding men can do it on a balmly Monday night in Qatar.

The evening kickoff saw USA take on a Wales team which took Gareth Bale out of his padded cotton wool suit which was encased inside an ice bath just second before kick off.

USA dominated the first half and were rewarded for their intense pressing with a George Weah’s son goal.

Wales came into the game in the second half after introducing Keifer Moore, who the USA team struggled to deal with on account of the fact he is the size of the Statue of fucking Liberty.

Desite the draw USA top the table in shit haircuts thanks Yedelin and McKennie.

Tim Ream tried to take a short cut through Gareth Bale in the penalty box at the 80 minute mark, resulting in a penalty which Gareth Bale dispatched but not before puffing out his cheeks 234 times in an effort to calm the nerves.

The resulting goal sent Welsh fans into wild scenes not since Catatonia’s frontwoman Cerys Matthews and Tom Jones did a cover of Baby It’s Cold Outside.

England fans struggled to get into the game as FIFA’s ticketing app crashed. In response Gianni Infantino said ‘I feel like crashed ticketing app’.

Over on Irish broadcaster RTÉ the decision to force their pundits to stand up during halftime analysis has been criticised by human rights groups as inhumane.

BBC pundit Alex Scott became the first pundit to earn a yellow card for wearing a One Love armband. Over on BeIN Sport Gary Neville made his most damning comments of Qatar yet stating “the people, food and weather are lovely, I think everyone criticising them are just ignorant. Can you please add another zero to my pay cheque now?”

18,000 Qatari sheikhs have died from heart attacks after a number of fans tried to gain entry into stadium while wearing rainbow coloured clothing.

Budweiser are reconsidering their €75 million sponsorship of the World Cup after realising actually being able to sell beer at the tournament is sort of the point.

Today sees Argentina in action, with everyone asked to cross their fingers and manifest Messi lifting the World Cup into existence.