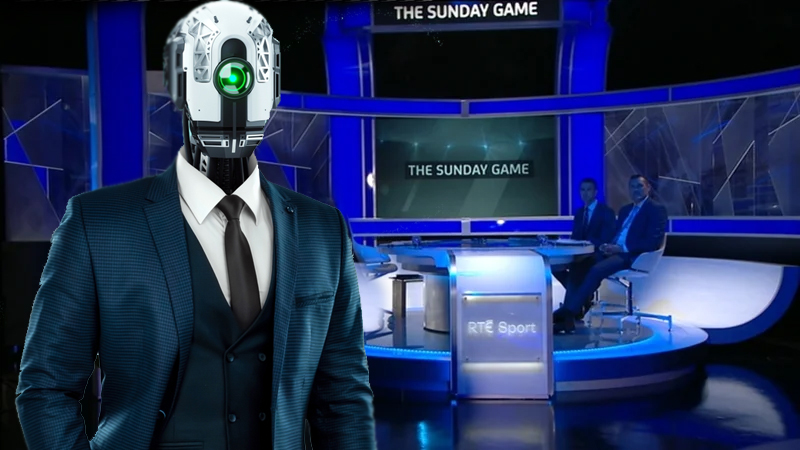 RTÉ have made the decision to go down the AI route when selecting who will be the next host of the Sunday Game, after realising that not only could nobody take the place of 15-year veteran Des Cahill, but none of Gerry Ryan’s kids have any interest in ‘bogger sports’ either.

The sentient artificial being known as ‘GAA Bot’ will take Cahill’s place when he steps down ahead of the 2023 season, and rumours suggest that the software needed to run the bot is equal to 1.75 RTÉ Players.

GAA Bot is currently being fed hundreds of thousands of Irish names in a bid to ensure it never mispronounces a player, club or venue, and work is being done to ensure its voice is neither male nor female, giving everyone something to complain about online.

“We’re also making sure it knows phrases like ‘ah now you’re a bit out of line there [INSERT PUNDIT NAME]’ and ‘it was all to play for in Clones today’ which should cover 90% of its output on any given Sunday,” said one RTÉ technician we spoke to, standing beside the Pentium 4 chip that will power GAA Bot.

“There was a bit of an issue early on, when we discovered that the software glitched if the Sunday Game theme tune was played at a certain frequency, causing GAA Bot to start blurting out some really very sectarian viewpoints. But we have it all fixed now, we think. There’ll be some teething problems, but nothing you’ll notice if you’re in the pub and the Sunday Game is on the telly with the sound down”.

Waterford Whispers Sports would like to take this opportunity to thank Mr. Cahill for his years of service on the Sunday Game, and wish him all the best in his new role hosting Sunday Womens Beach Volleyball in California.