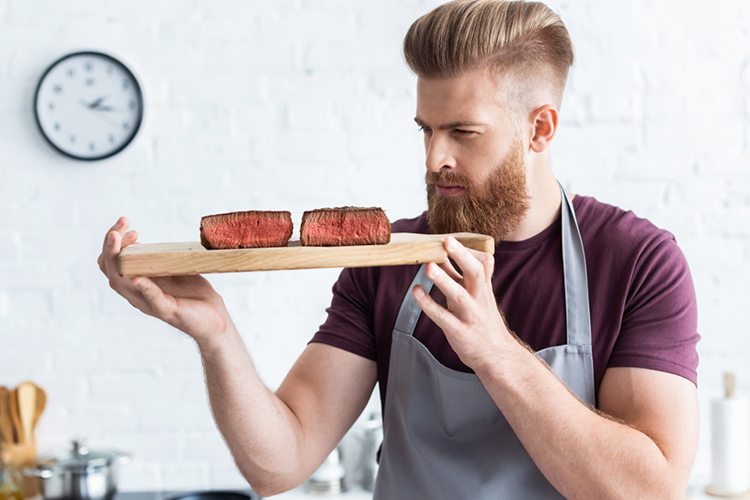 “ONE of these was definitely bigger than the other when I started cooking, but which one now?” a panicked Jeremy O’Meara barked at himself, searing all sides of two unevenly cut pieces of beef which made it difficult to gauge, “I know I asked the butcher for a ‘his and hers’, but they’re two different cuts and I’ve no scales to check”.

Fearing his wife may get the marginally bigger steak, the Cavan man tried weighing each cut by hand using the spatula, switching from left to right, bending down to see their thickness, before scratching his bewildered head.

“Now, there’s a bit of grizzle running through this one, and I don’t mind that, but it’s throwing me off now and can’t decide if that’s my one,” the one-not-to-be-out-done-of-steak-meat continued.

O’Meara is one of thousands of men who believe a man should get a bigger portion than a women, because he’s bigger and stronger, something breed into him since a young age living on a farm.

“What if the father calls in and sees I’m eating a smaller steak than Tina? He’ll laugh at me ’till his grave,” he panicked more, frantically plating up the pair of medium rares onto a white plate, staring intensely before calling his wife in for dinner, “right, fuck it, I can’t decide, I’ll just lob more potatoes and onions on mine to save face – problem solved”.

Now finishing up his meal like it was his last, while his wife slowly picked away, O’Meara couldn’t help but still feel a little cheated, before doing his usual play.

“Are you finishing that, love?” he asked, knowing his good-natured spouse would comply.

“Tis lovely, Jer, but way too much for me, do you want some? Havbe the rest of this,” she replied, secretly cursing the greedy bastard to hell.