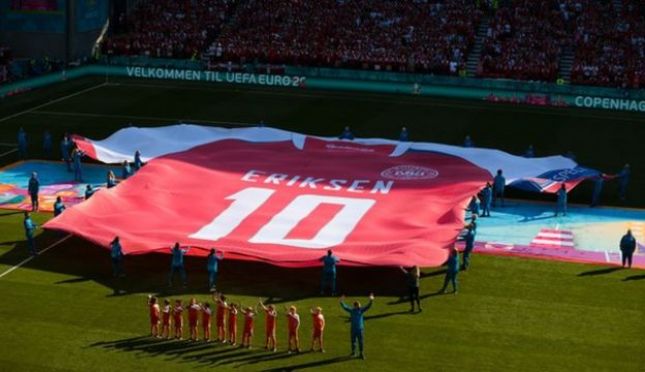 THE DENMARK game had an understandably emotional atmosphere pre-match as a number of moving tributes were paid to Christian Eriksen. A giant no.10 jersey was unveiled before the game; a nice gesture but it’s hoped they’ve kept the gift receipt as it probably won’t fit him.

As a mark of respect to Christian Eriksen, Belgium defender Jason Denayer allowed Denmark to score shortly after kick off. Conceding in the 2nd minute, the Belgians still kept a clean sheet longer than Edwin Poots was leader of the DUP.

Denmark came roaring out of the blocks with an intensity that could rival a drunken 3am ‘what am I doing with my life’ conversation between two women in a nightclub toilet.

More lethargic than a hungover sloth, Belgium had no shots, no ideas and no answers to Denmark’s pressing in the first half.

Unlocking a FIFA cheat code in the second half Belgium manager Roberto Martinez brought on Kevin de Bruyne, Eden Hazard and Axel Witsel, and in a complete failure to read the room Belgium then went on to equalise through Not That Hazard.

Denmark knew they were in more danger when Hazards combined to line De Bruyne up for a shot the Man City man dispatched as clinically as ‘it’s not you it’s me’ text from an ex.

With the footballing world willing them on Denmark tried to secure a late goal but even Schmeichel running up for a corner in the Belgium box while screaming ‘I am Alisson!’ couldn’t yield an equaliser.

Earlier, North Macedonia more than justified their presence at the tournament with a performance against Ukraine so spirited it could haunt a mansion.

However RTÉ viewers’ focus during the game remained on the presence of a ‘phantom sniffer’ on commentary.
Despite producing more sniffs than a drugs dog at an airport, RTÉ were quick to point out they definitely don’t pay freelancers enough to afford cocaine.

Ukraine won the game 2-1, setting up a mutually beneficial draw with Austria in the final group game, which will be as unwatchable as your parent’s sextape.

The evening kickoff saw Netherlands secure a win after Austria put up the sort of weak opposition that would make Keir Starmer blush.

Austria have admitted it was a tactical error to play a defensive line higher than the in-patient queue at a Betty Ford clinic.

Normally Austria’s star man, David Alaba gave away a penalty after producing a stamp that wouldn’t look out of place on a cafe’s free coffee loyalty card.

Depay converted the penalty and Dumfries secure the win with a second goal, prompting some viewers to get furious over the fact they listened to their idiot WhatsApp group and put money on Turkey instead of the Dutch.

Elsewhere, UEFA have confirmed they have glued all bottles of Coke and Heineken to press conference tables so don’t even try it.

Sergio Ramos has confirmed he is leaving Real Madrid, the hot tempered and combustible master of shit-housery would be the perfect candidate to put some manners back on the DUP.

Today’s games sees the English media being unbearable, while Croatia and the Czech Republic face off in the ‘countries you mixed up as a kid’ derby. In the early kickoff, Sweden and Slovakia understand if can’t make it.