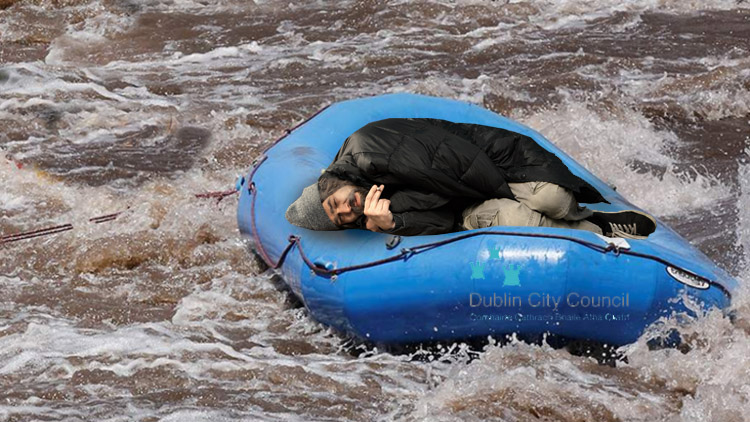 A CONTROVERSIAL new white-water rafting facility is to allow the city’s homeless community to sleep there when not in use, allocating one raft to each homeless person wishing to avail of the new scheme, Dublin City Council (DCC) confirmed.

The €22.8 million construction, soon to be €50 million, has come under fire by politicians and peasants alike, with many calling it a ‘political obscenity’, a ‘grotesque vanity project’ and a ‘what the actual fuck are you playing at lads, eh?’.

“We can strap them in overnight and they can spin around in the rafts as they sleep, it’ll kill two birds,” one member of DCC said defending the decision, “sure, we could probably build actual homes with the money we’re going to overspend on this, but where would the craic in that be? The homeless lads will love it”.

Despite already being refused a €6.6 million grant application by the government for the project, the council is currently gauging expressions of interest in the construction, including children’s hospital construction company BAM and Bob the builder.

“Sleeping on a white-water raft couldn’t be any more dangerous than sleeping in a Dublin city doorstep,” one man told WWN, “at least I won’t get pissed on, crushed by a council digger, set on fire or stabbed to death spinning around on one of them things”.