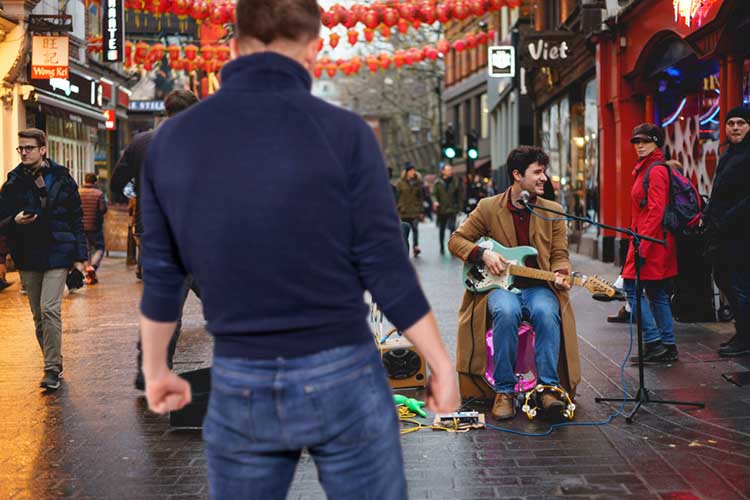 DETERMINED not to let COVID-19 restrictions completely ruin his 2020, Dublin man Eric Larragher has headed into the city center with 140 euro in cash tucked into his sock to cover the taxi soilage charge he’s going to incur on the way home from a night on the tear.

“So far this year I’ve missed day-long piss-ups on birthdays, bank holidays and my cousin’s confirmation; I’m not missing Christmas too,” said an emotional Larragher, waiting at pub number one for the rest of his mates to land so they can test the limits of how much drink they’ll get served on the strength of an order of chicken wings as their ‘substantial meal’.

Waiting in the chill air of a Winter afternoon as the fading light gave way to the flickering glow of thousands of street lights, 34-year old Larragher became somewhat emotional at the thoughts that in a matter of only six or seven hours of drinking, he could be getting held back by his pals as he attempts to start a row with a busker who refused to take requests.

“You have to keep some traditions alive,” gave the emotional dad of three, dabbing at his eyes.

“I think of all the hospital staff who’ve worked so hard this year, and about how I’ll be seeing them tonight at around half three, before storming out and asking the night porter if he wants a headbutt on the way”.

Although a night of heavy excess in the company of strangers awaits, Larragher insists that he’ll ‘be grand’ by tomorrow afternoon when he visits his folks, adding that ‘it wouldn’t be Christmas’ if his elderly mother didn’t playfully chastise him for having a bit of a hangover.