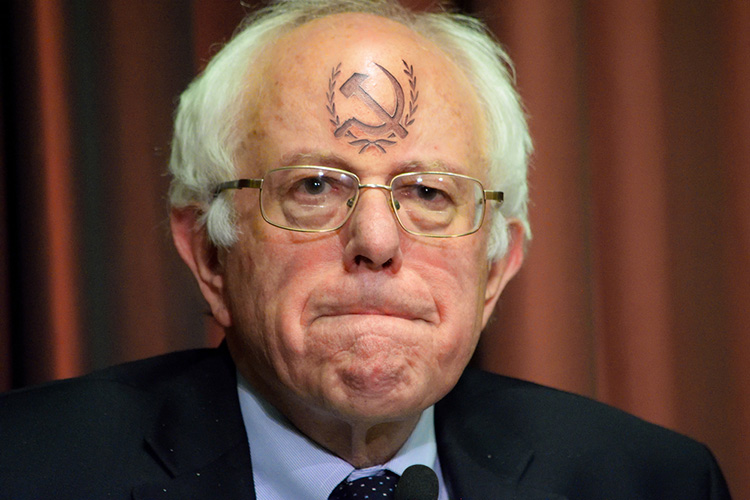 SEEKING to reinvigorate his passionate support on the ground and gain new voters, Bernie Sanders, up against Joe Biden for the position of Democratic nominee for president, has unveiled a new tattoo which is sure to play well with young voters and former Bolsheviks revolutionaries alike.

Unveiling his tattoo in front of a rally in Arizona, Sanders, his forehead inked with a Soviet hammer and sickle, was bathed in cheers and applause for what is considered by experts to be the most recent hint that the Vermont senator’s politics may lie left of cosy centre ground derided by fed up voters seeking real progress and change.

Inked by one-time Post Malone tattoo artist Victor Modafferi, the iconic hammer and sickle could see fresh buzz build around Sanders as he goes toe to toe with Biden in a live TV debate this Sunday.

“It’s just a tattoo, no biggy, I’m a fly guy, Tik Tok always on the clock, I’m a chill Bill, I stan for socialism,” Sanders told an excitable crowd of supporters, who have been conditioned to cheer everything the 78-year-old says.

Despite the obvious attempt to grab headlines with the tattoo stunt, coupled with policies that don’t overtly take a dump on the poor Sanders still faces an uphill battle against Biden, a man who has remained mid-aneurysm during the campaign, and a dismissive media keen to demonise.

“What we’re seeing now for the first time is irrefutable evidence that Sanders is the literal love child of Fidel Castro and Josef Stalin,” confirmed one of several hundred Fox News reports on Sanders’ new tattoo, which the network speculated was one of just thousands of communist tattoos on his body.