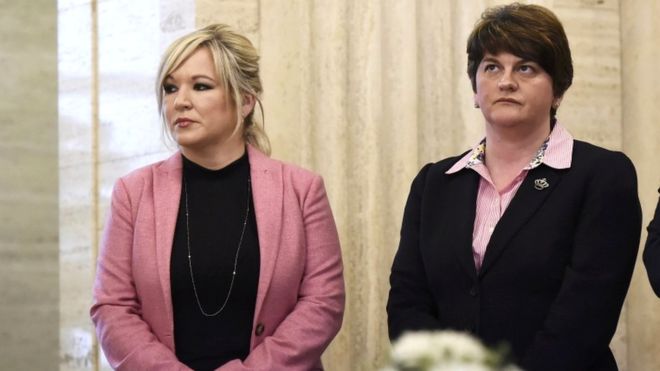 NORTHERN Ireland has finally welcomed back the NI Executive following a three year hiatus, with politicians and citizens on both sides of the political divide agreeing to smother their true feelings with a blanket knitted from pure solid anger, WWN can confirm.

Both Sinn Féin’s Michelle O’Neill and the DUP’s Arlene Foster, the new executive’s Deputy First Minister and First Minister respectively, put on their happy faces for a visit by Taoiseach Leo Varadkar and Prime Minister Boris Johnson today, masking their shimmering fury that bubbles throughout their communities across the North at the minute, like a big sectarian cauliflower cheese straight out of the anger oven.

With the traditional Catholics v Protestants Nordie anger replaced in recent years with, on last count, thirteen hundred more things to be vexed about, Northern Ireland has become perhaps the angriest place on earth, beating out a small island territory off the coast of Africa where the language consists of nothing but shouting.

“You’d want to see the face on Foster when she realised today was the day the gays could legally get married in the North” said one political commentator.

“It was almost as bad as O’Neill’s face when she realised she had to go back to work with Arlene even after the Cash-for-Ash scandal, which somehow didn’t unseat her from power. It’s incredible up here now. You’ve Unionists angry with other Unionists. You’ve border poll anger. Abortion anger. Take the gay cake anger form a few years ago and multiply it by a hundred. A million plus angry Nordies. It’s really quite a time to be alive”.

The spokesperson made sure to add that it’s still just January, and commentators should ‘wait until July’ to really see the blood pressure rise.