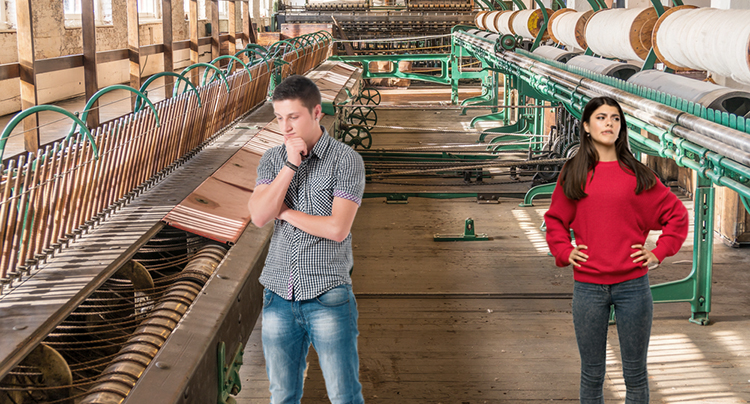 THIS is the moment when a couple of clueless young adults are captured trying to operate a 19th century cotton mill without any success, before then failing miserably and proving once again that snowflakes are complete idiots when it comes to older technologies.

In the picture above, siblings Darren and Tracey Trent from South County Dublin appear stumped as they attempt to work out how to start the weaving machinery to produce cotton cloth like it was made during the Industrial Revolution.

The social experimented by WWN got off to a disastrous start for the pair as they desperately tried to engage the steam powered mill, forgetting of course to throw several tonnes of coal into the furnace before waiting several hours for it to heat up, allowing it to create the steam needed to operate the complex system of valves and mechanical machinery.

“Seriously, how the hell am I supposed to know how to operate this mill; my great granddad wasn’t even alive then,” 19-year-old Darren Trent attempted to excuse himself, unaware of how ridiculous he and his sister looked to us older people right now who know all about cotton mills, “no really, this is some load of bullshit”.

Prodding various dials and levers, sister Tracey Trent similarly failed in the most adorable manner while attempting the task.

“Why are we doing this again? I don’t get it?” she hilariously said, equally unaware of her own stupidity when it comes to operating a 19th century cotton mill.

The frustrated teens are then seen angrily yanking various pieces of machinery when snowflake Darren starts untangling some threads from a giant gear, when it suddenly engages on its own accord and crushes both his index and ring fingers into a mincey goo, now hanging off his right hand.

“Argh, my fucking fingers… argh… help me… arghh my fucking fing… arghh,” the silly goose yelled, now collapsing in a heap to the ground in agony, interestingly emulating what a 7-year-old child of the industrial revolution may have done.

“Call an ambulance you sick fucks… what is wrong with you people?” both snowflakes shouted before admitting they had no idea how to operate a 19th century cotton mill, thus proving our point.