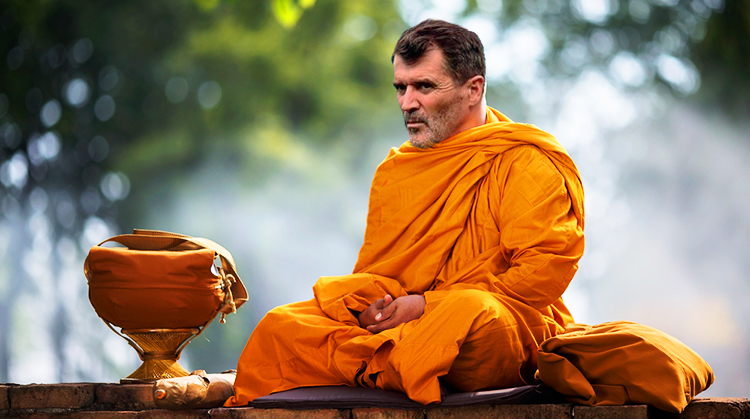 IN THE WAKE of a fresh row with any number of footballers, Ireland assistant manager Roy Keane has taken the unprecedented step of converting to Buddhism in a bid to finally find some inner calm, WWN can reveal.

With Ireland now resorting to calling up players from the under-9s leagues across the country to fill the increased number of vacancies in the squad caused by Keane’s relentlessly intemperate ways, the Cork man has acknowledged the need for a big life change to curb his temper.

“Roy’s made the decision by himself, I wouldn’t push him into anything and to be fair whatever works for Roy at the end of the day, as long as he doesn’t become one of those self-immolating monks,” confirmed Ireland manager Martin O’Neill, who is without Harry Arter and 945 other Irish players following Keane-related bust ups.

Buddhism, which places personal spiritual development at the centre of its belief system with followers attempting to achieve an inner peace, or state of Nirvana, could be the answer to newly minted monk Keane’s quest for calm. The former Man United player was unavailable for interviews with the media as his new routine requires him to meditate for 22 hours a day.

“I put my ear to the door of his ‘Room of Calm’ just to check up on him,” added O’Neill, “I had no idea meditation involved screaming non-stop while throwing things around but honestly he’s like a new man. Fair play to him”.

It’s not just O’Neill who seems overjoyed with Roy’s conversion as the players he coaches are already heaping praise on him.

“So basically lads, Roy’s got back from a pilgrimage to Bhutan. The training is better, the lads all seem in a happier mood, there’s less tension oh, and Roy is wearing full Buddhist robes and has rejected all forms of materialism. He hasn’t called anyone an injury stricken cunt today, so far so good,” confirmed an Irish squad insider in a WhatsApp voice message which leaked to the press.