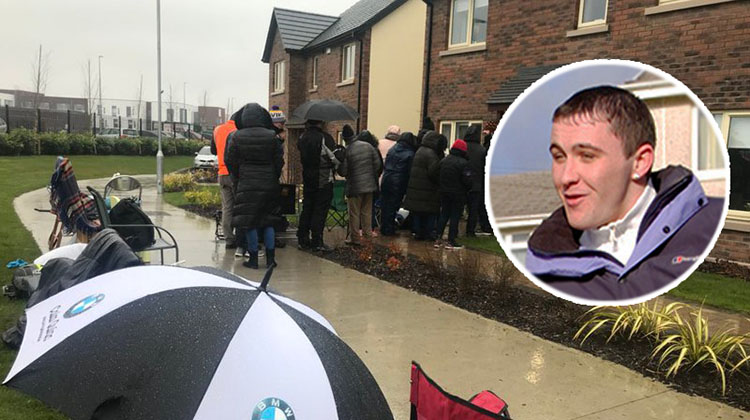 DESPERATE property buyers are being charged as much as €5,000 euros by queueing touts who have infiltrated a growing number of house hunters who are currently queuing outside a new West Dublin housing estate in the hope of securing a property.

The first potential buyers formed a queue at the sales office at Beechwood Heath in Hansfield, Dublin 15, at around 6am yesterday morning, despite bids not opening until Friday. However, it wasn’t long before opportunistic touts swooped in.

“Get yer space in line, one for 5k, two for 9,” one men wearing an Adidas hoodie and a NY baseball hat shouted at passersby, “prime position folks, prices will go up with time”.

It is understood the longer touts are embedded in the queue, the higher prices will be for buyers wishing to avoid the cold, damp weather, but who want to secure a place before Friday’s deposit deadline.

“Myself and the wife have to work all this week, so this is our only option,” first time buyer Karl Murray told WWN, before handing over four thousand euros to one tout, who then demanded a carton of fags from Murray to ‘keep him going until Friday’.

So far forty touts are currently holding positions in the queue, several of whom later scattered when a social welfare officer arrived on the scene.

“I have a funny feeling some people may have lost their place in the queue, and a tonne of money,” said one homebuyer, “sure, we’ll probably be all defaulting in ten years anyway, so here goes nothing… again”.