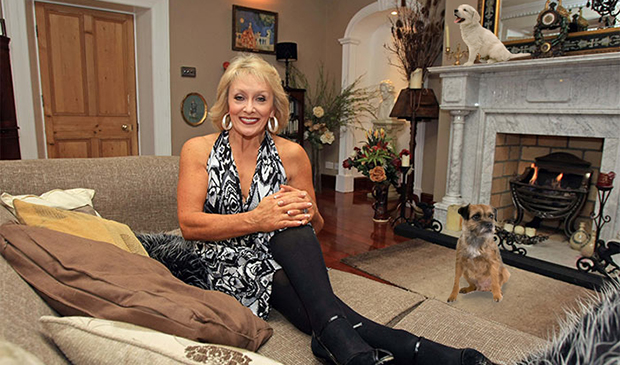 FOLLOWING a difficult year for Ireland’s premier panto queen, Twink opens up to WWN about the ‘other channels’ on her Sky Digi box and how it has plagued her and her family for the past three years, claiming no one is willing to do anything about it.

Joining a large queue of reporters waiting outside her home, one could not help from wondering if all this fame was worth it; the endless newspaper interviews, the lack of privacy, the €23.25 extra a month for the Sky movies package.

“I hear she had to cancel the sports last week,” mentioned an Indo hack behind me. “No one watching it, apparently. Tragic”.

The rumours were rife, so we knew we had to tread carefully with Adele; as she is known to be feisty at the best of times.

My ticket number 1,234 was eventually called by a frail looking man in suspenders. He looked familiar chomping down on my stub with his upper right canine, puncturing a neat hole in my pass.

“Don’t mention the whole house thing,” he advised, pointing to a journalist being stretchered out on an ambulance gurney.

I placed the now half-soggy ticket in my pocket, before entering a large Georgian dining room in which Twink was waiting. She began rearranging the dogs for my photographer.

“I’ve done so many interviews today that I’m struggling to come up with new positions for my dogs; can you help?” she asked politely.

Grabbing two hounds, I placed one on the mantlepiece and the other in front of the fire.

“Thank you,” she said, complimenting my dog positioning. “We should get you in here more often!”

“You’re welcome, Adele. I’d like to thank you first of all for,” I began, before a large remote control landed onto my lap.

“Turn over to ITV there,” she barked.

In what felt like hours, I half-heartedly scrolled up and down through the channels to no avail. Where were these God damn ITV channels? Surely this was some kind of joke?

Gathering herself together, the emotional Twink quickly took the remote control from my hands and scrolled to an unknown menu at the top of the sky blue screen.

“Other channels,” she pointed out. “All hidden in the backend of this piece of fucking shit Sky box, like some kind of dirty secret… and you can’t even record them!”

Unaware of this feature due to having a different TV and broadband provider, I was somewhat underwhelmed by her revelation, thus questioning the seriousness of such a thing.

“I suppose Sky don’t really have the rights to those stations, but probably have to carry them on their satellites for various reasons,” I stated.

A silence fell on the room. Adele fixed a stare. The dog I perched on the mantelpiece began growling slightly.

“Who you with?” she asked sharply.

“Who’s your fucking TV provider,” she shouted, slamming the remote on the arm of the chair.

“It’s Virgin, you posh prick,” Twink said even louder. “It must be great to be so high and mighty to not have to search separately for the ITV channels or Channel 5. Your parents must be so fucking proud!”

Realising my ignorance, I apologised to Twink and tried to empathise with her as best I could.

“Sure, ITV is the same as UTV Ireland really, so you’re not really missing out on much. At least you still have ITV. There are some people in the world with no ITV at all,” I said.

Twink seemed to calm down a bit, now flicking between ITV, ITV+1 and ITV 2. She seemed to be thinking about my point, occasionally glancing back to my half-smiling, grimaced face. The dog began wagging its tail.

“You know what?” she asked. “You make a good point here and I’m now feeling a little bit silly for making such a fuss over having to search separately for silly old channels.”

“No. No. You’re right to make a fuss Adele,” I replied, sort of grovelling. “Sky haven’t changed that interface for decades. I know three year olds who could design better layouts than that.”

“Hahahaha… you’re right. And what the hell is with all those other useless channels on there that we have to flick through. Hours wasted having to scroll down,” she said.

With that, we both laughed at our observations, now forever allies in our disdain for Sky digital.

“Thanks for coming today,” Twink said, now ushering me towards the door before telling the rest of the journalists to go home. “You should be quite proud of yourself today.”