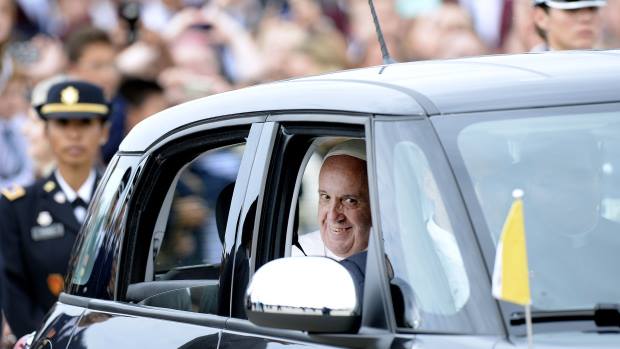 POPE Francis’ historic six-day visit to the United States got off to a shaky start yesterday, as the 266th and current representations of God on Earth was greeted at St Andrew’s air force base by a Fiat 500 not unlike what your Mam might drive.

The pontiff initially had a bit of a giggle when he saw the tiny car pull up, but this soon turned to anger when he realised that this was the actual car that had been put on for him by the US Government.

“I’m the Pope on my first visit to America, not a grandmother picking up the kids from school,” said the 78-year-old, who has just about had it up to here at this stage.

“Look at the jeeps the secret service lads have, and look at the fuckin puddle-jumper they gave me… I swear to God, if I were Justin Bieber I’d have at least gotten a Suburban”.

Pope Francis confided his frustrations with his closest aides, put maintained a dignified and humble appearance in the face of the assembled media.

“Oh, I love my little car,” he told one reporter.

“Low tax, good mileage, easy to park. I mean, if it had alloys or a CD player, I wouldn’t have said no, but it’s fine for the time being. No need for one of those kickass jeeps at all”.

The Pope’s six day visit is expected to include a visit to Philadelphia, where the pontiff has expressed a wish to run up the steps of the Philadelphia library “like Rocky”.