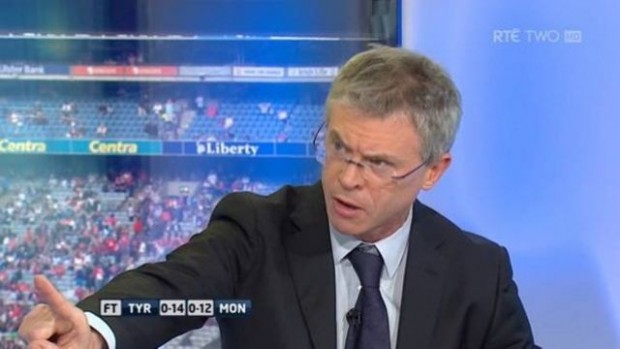 WWN understands that RTÉ GAA pundit Joe Brolly has already begun preparing a specially crafted rant which he will unveil during the All-Ireland football final on the 20th of September.

“I thought it might be ready by the time semi-finals arrive, but if I want to have the biggest audience, and annoy and frustrate the most people. Nothing compares to a rant on All-Ireland final day,” Brolly confirmed to a WWN source embedded deep within the RTÉ sports department.

While Brolly wouldn’t be drawn on the contents of his rant, he did at least confirm it would be contrary in the extreme and would be launched completely out of left-field.

“Hang on a second, if you look at the Dunphys and the Hooks of this world, they didn’t get to where they are today by toeing the line. The best way to blindside the lads in the studio, and those at home is to sort of wind your way out of a seemingly straightforward observation and boom, just declare GAA as we know to be dead and buried,” Brolly added to our source.

Brolly’s preparation is said to include copious note taking, and monitoring what are the most popularly held GAA opinions of the day and finding ways of eviscerating them.

“We’re probably talking a rant on the levels of Dunphy’s ‘Ronaldo is a shite player’ circa 2010,” a researcher in RTÉ’s sport department told WWN, “I’ve never seen him this focused on pulling any old shite opinion out of his arse just to annoy people”.

It is believed Brolly will unleash his controversial rant in his analysis before the final kicks off, giving it the best chance of trending on Twitter.