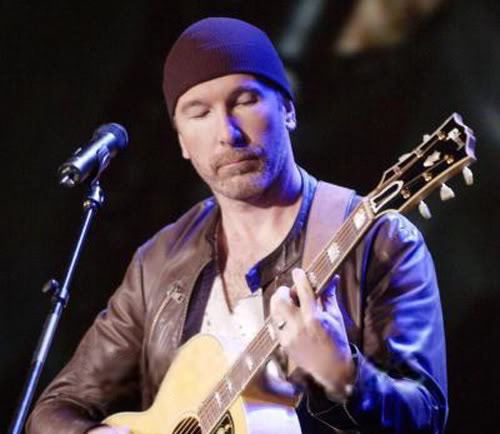 FOLLOWING U2’s recent album download success with tech giants Apple, lead guitarist David Evans aka ‘The Edge’ has gone from strength to strength, claiming a “new lease of life” in the music game and even learning a new chord. We traveled to the star’s Irish home in Killiney to chat with him more about this process and his ongoing success as the lead guitarist of the world’s most popular band.

I arrived on Sorrento road around 2pm to meet David outside his highly secured mansion. At the gates there was a scruffy bald headed man facing the other way. He appeared disorientated and was hitting the wooden gates hard with the tips of his fingers – as though playing an imaginary piano.

I shouted at the intruder to clear off before I “called the Guards”. To my utter surprise, he turned around to reveal his face. It was The Edge!

“Sorry, I’m just trying to build up my calluses. This new chord I’m learning has me beat,” he shouted, now embarrassed. “I hope you won’t write this in your piece.”

“Of course not Dave,” I replied, while typing a reminder note into my phone. “Pleased to meet you. I’m Paddy Browne”.

Dave shook my hand and ushered me inside the gates. The house was what you would expect for the area – old style with luscious gardens with a large 20 foot tall Bono water feature.

“Bono bought me that for my fiftieth,” he pointed out while scratching a small tuft of hair on his head. “Let us go to my studio. I want to show you this new chord I’m learning”.

Intrigued, I followed him around the house to a beautiful wooden building at the back. He made some coffee and lobbed a packet of Tesco Jaffa Cakes onto the table.

“So, David. First of all I’d like to congratulate you on the band’s recent success with the Apple album. You guys really put the critics in their place,” I started.

“Yeah. Paul Brady is a cunt,” he replied, before picking up his guitar. “Can you pass me that book behind you there, please. I’m really excited about showing you this”.

I reached around to find a guitar book called ‘8 Essential Chords For The Guitar’. The book seemed old and dog-eared.

“I’ve had this since The Joshua Tree,” he said, opening a bookmarked page simply called ‘Am’. “Have a listen to this”.

Carefully placing his fingers into position, the lead guitarist of the world’s most popular band strummed with his right hand. His tongue protruding with concentration. It sounded awful.

“What you think?” he asked me.

Time began to warp with his beady eyed stare of enthusiasm. He resembled a cocker spaniel about to get a treat. Putting my teacup to my lips to give me more time, I had no idea what I was about to say on the exhale.

“Yeah! It’s very good Dave. Did you learn that just today or what?” I blurted.

“Are you kidding me? I only began learning this chord last year. Is it bad?” he said with a slightly confused look.

“Isn’t ‘A minor’ one of the basic chords of guitar?” I asked, now wishing the ground would swallow me whole.

“I wouldn’t say ‘basic’, Paddy. This is the last chord in the book so I think I’m doing pretty well,” he explained.

“So, how many chords can you play?”

“This will be number eight – the final chord there is,” he said matter-of-factly.

“I’m pretty sure there are more chords than eight Dave,” I pointed out, noticing a Naomi Campbell dart board on the wall with knives in it. “But, what would I know. I’m a fucking writer for fuck’s sake!”

Luckily my attempt at humour paid off, and The Edge began laughing uncontrollably. This was fine for the first thirty seconds or so, but he didn’t stop. He began repeating the sentence ‘I’m a writer for fuck’s sake’ and started slapping me on the back in jest. This went on for what seemed like an eternity.

Finally stopping, wiping tears from his face, Mr. Evans gathered himself together and began strumming again, carefully staring at his fretted fingers. Whispering to them.

“You know; once I master this last chord, I’ll probably go down in history as the best guitar player man in the history of planet earth,” he said, staring directly at me for acknowledgment. “Won’t I? Won’t I Paddy? Won’t I be great then? Dave Fanning told me so”.

“Yes, you will Dave. Yes, you will,” I replied, now looking for the nearest exit. “Sorry, but I think I left my dictaphone in the car. I’m just gonna pop out and get it”.

“Isn’t that it there?” he said, picking up my blasted fucking Dictaphone.

“Ah yes, that’s the cheap one I use for just normal people. I need my really expensive one I left in the car. It’s for special people, like you. It’s an Apple one,” I concocted.

“Apple! I love their stuff!!” he shouted, before jumping up and down like a child. “Apple is great! Weeeee… I love Apple!”

Leaving him in the moment, I immediately left the now dancing 53-year-old musician in his home studio. I must have resembled one of those ridiculous Olympic walkers as I left his mansion for dust.

Closing the Evans household gates behind me, I concluded there was a fine line between madness and genius. And unfortunately for Dave, he was nowhere near either.