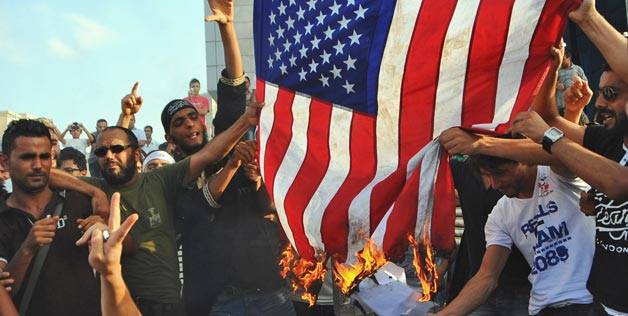 Located in the heart of the capital, Malik’s shop offer high quality flags and effigies of political leaders from across the world. The walls of the shop are adorned with flags; mostly from the US, Great Britain, Israel, Iran, but also from countries like Portugal and Bosnia and Herzegovina.

“You never know who is going to piss off the people next,” said Malik, who also owns branches all across the Middle East.

“Remember when the Danish newspaper printed cartoons of Mohammed? There were protests on the streets within an hour! Where do you think those people got a Danish flag to burn in such short notice? Why, they come to Malik’s Flag ‘N Petrol! I stock every flag from across the world so no matter who you are furious with, you can be burning their flag on the street within minutes”.

Opened in the early nineties in response to the first Gulf war, Malik (along with his father, five brothers and nine cousins, all of whom are now dead) opened the store after noticing the anger and quickness to demonstrate of his fellow countrymen. Malik went on to explain that before his shop opened, protestors would have to buy flags via mail order, resulting in waits of up to five working days before they could burn it on the street.

“There ain’t no party like an Iraqi flag-burning party”, the 41-year-old beamed.

“When our people feel aggrieved about something, they will let the world know about it. Waiting for flags to arrive in the post was a nightmare; now people know if they drop into Maliks, they will get torching straight away. I also offer petrol, so you don’t have to make a second stop at a petrol station. You can buy a flag and some petrol for 10,000 dinar (about US$9). I call it the Unhappy Meal”.

On top of flags (which Malik is quick to assure us are made from highly flammable material and meet no Fire Safety standards), the store also sells eerily accurate effigies of world leaders. Rows of lifesize Barack Obamas, David Camerons and Bashar al-Assad dolls hang from the rafters, all stuffed with dry hay to “go up” quicker.

“Yes, the effigies; they are more expensive and harder to store, so initially I didn’t stock them too much,” said Malik, has had to hire more staff to cope with anger over the impeding return of American troops to the region.

“Then Bin Laden was killed, and I was swamped with complaints from customers who said they could not get an Obama figure to burn! Our shops could barely cope with the demand. We were ringing from branch to branch, ‘hello, do you have any Obamas? Check in the back store! I have customers waiting here, right now!’… After that, we keep well stocked all the time”.

As we leave the store and head back to our security convoy, we have one last question for Malik; does he ever see himself opening a store like this in Ireland?

“Ha ha ha ha!” beamed the businessman. “It is true that the Irish have plenty to demonstrate about, but can you really see the people on the street burning flags? Irish people are too docile. I was thinking maybe of opening a shop in Greece, where they stand up for themselves and make their voices heard, or even in France”.

“But in Ireland? That shop would go out of business very quickly”.