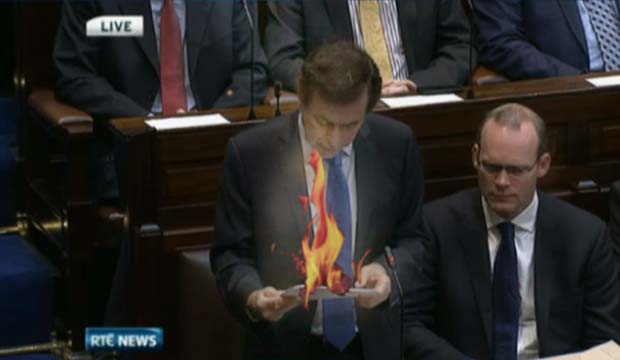 FORMER Justice Minister Alan Shatter was back in the limelight following some extraordinary scenes in the Dáil yesterday.

Addressing the publication of the Guerin report, which scolded Shatter and Gardaí for not dealing with the concerns of Garda whistleblower Maurice McCabe properly, the Fine Gael TD made use of his parliamentary privilege to shock the entire Dáil.

The Taoiseach was overheard saying “Shit, he’s gone full rogue,” as TD Shatter whipped out a lighter and began burning the Guerin report, his gleeful smile on full display. Leo Varadkar leapt on the Taoiseach fearing Shatter had turned to homicidal rage, but thankfully this was not the case.

It has been speculated for weeks that Shatter had adopted a ‘couldn’t care less’ approach following his resignation from his position as Minister for Justice. Reports of Shatter being late for the Dáil, wearing his favourite leather jacket to official engagements and bumming smokes off the kids outside Leinster House have presented the senior Fine Gael members with a problem.

“I approached his constituent office earlier in the week to have a chat,” a Fine Gael insider shared, “but the sign outside the office read ‘Do Not Disturb, Busy Not Giving A Shit’, it’s beyond worrisome at this stage.”

Shatter’s decision to light the Guerin report on fire prompted the Dáil fire alarms to go off with the sprinklers raining down on the entire room. While many disgruntled TDs made for the exit Shatter simply stood in the same spot, hold the burning report, his smile growing ever wider.

The flames were finally extinguished, but not before Shatter used the flaming pages to light a smoke, toss the report over his shoulder and amble lazily out of the Dáil chambers.

A young, impressionable child was overheard in the viewing gallery remarking ‘wow Dad, is that what all politicians do? I want to be one when I grow up!’

No action has been taken against Shatter but it is believed a tempestuous meeting the TD had senior Fine Gael officials reached an impasse as Shatter continually repeated “I know you are but what am I?”