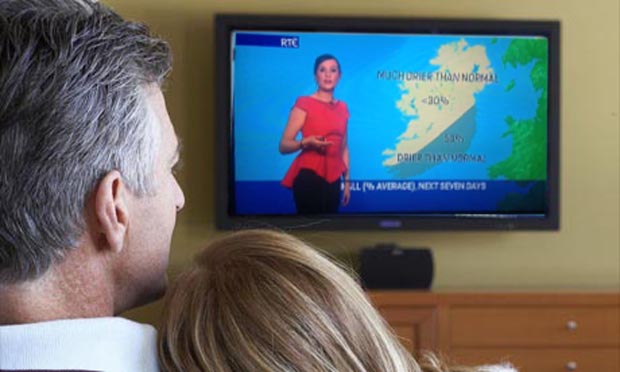 THE NATIONS licence fee payers said the only bit of entertainment coming from the national broadcaster recently was the stations News Bloopers, it was revealed today.

This week, Saorview box owners across the country were treated once again to another comedy gold gem, which showed weather woman Siobhan Ryan stopping during a broadcast, leaving out a frustrated sigh and began fiddling with buttons.

In the hilarious clip, Ms. Ryan played with the computer, changing the background on the screen before she returned to face the camera.

“Well, I nearly choked on my Marietta biscuit,” said Bog station viewer Teddy Kane. “She had no idea she was still on the air so she just started taking off her microphone and started singing.”

“I think me and the wife laughed for a good four hours at the outrageous display of humanness.”

RTE were not available to comment on last nights recent cock up, but sources inside the station say the whole news blooper thing is becoming too regular now to be accidental.

“I think the chiefs here have copped on that people enjoy the mistakes more than the actual programming.” said one producer, who wishes to remain anonymous. “Rumour has it Aengus Mac Grianna has already been rehearsing for his next blooper, which is due to air in October.”