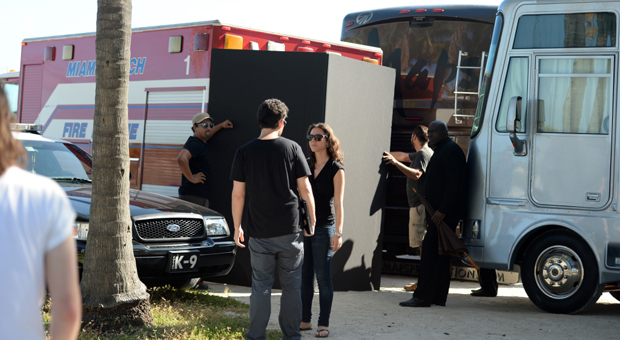 The bad luck continues for the ‘Wrecking Ball’ singer following the burning down of her tour bus on Tuesday.

Miley Cyrus was rushed to hospital midway through her New Orleans concert date. The 21-year-old, notorious for her tongue wagging behaviour has finally seen her antics catch up with her during the performing of a hit Bangerz song.

Cyrus was on stage singing popular single ‘We Can’t Stop’ when halfway through the performance she seemed to become distressed as her fans continued to scream unaware the diva was in discomfort.

The lights in the New Orleans Arena were dimmed as the on site paramedics rushed onto the stage to the young singer’s aid. Head of tour security Nevin Prudes spoke exclusively to WWN just moments ago about the incident.

“It was always a fear, a beautiful and talented woman like Miley would push herself too far. She wanted to give her all to her fans and she pushed herself to the point of dislocating her tongue,” a distressed Prudes confirmed.

Miley’s ‘tongue coach’ Devendra J. Williams shared her thoughts with our reporter at the scene. “You may laugh at the thought of a tongue coach, but I think everyone saw this tongue-related meltdown coming. We had put Miley on a strict routine of 21 extreme tongue extensions per day but, I don’t mind saying it – she went too far.”

The consensus amongst Miley’s crew is that she had finally gone too far, pushed herself to the limit and been on the verge of a meltdown with sooner or later something having to give way.

While the singer is not believed to have any substance abuse problems whatsoever her PR manager is recommending a 99 day stay in a rehab facility.

Doctor Jonathan B. Goode treated Miley when she arrived at Tulane University Hospital: “her injuries were consistent with overuse of the tongue, but after undergoing a painful but brief procedure she had full range of motion in her tongue again. The patient also availed of our 2 for 1 procedure over and had breast implants fitted”.

Miley’s famous father Billy Ray has been unavailable for comment as it is believed he has not left his daughter’s bedside.

It is unclear how many dates of the Bangerz tour will be postponed as a result of Miley’s injury.