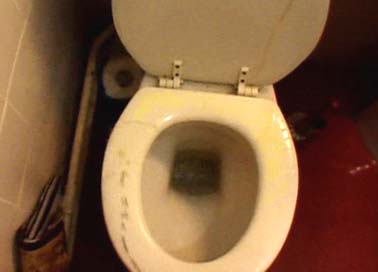 TWO MEN and one woman were still being questioned in connection with the discovery of a large quantity of urine on a toilet seat in the early hours of this morning.

All three were confronted during an after hours session in the Glen area of Waterford city by house party hosts John Mulhall and David Kerwin, and the three are expected to be formally charged with the Offence Against the Session Act 2006.

The grim discovery was made by local unemployed man, Packi Quinn, who was also attending the post-club house-party.

It is now thought the urine may have been there during several ‘sit downs’ and was described as ‘manky’ by several other party guests at the time.

Acting on specific intelligence arising from broken memory and general suspicion, party host John Mulhall accused two people in the kitchen and one in the hallway of making the ghastly mess.

A 23-year-old man was also questioned on the staircase after he had already three complaints against him about his behaviour from a number of people in the sitting room.

“He’s just a bit weird like. No one knows whose friend, he is or how he got here. He’s just really annoying, bummin’ smokes, asking stupid questions all the time and sticking to people at the session. He must have just followed us home from the Forum or something,” said one guest.

Tenants Mulhall and Kerwin later addressed the session asking people not to appoint blame on anyone else without having some credible evidence to back it up.

If found guilty, the culprit could face a maximum ban of six months from the gaff.