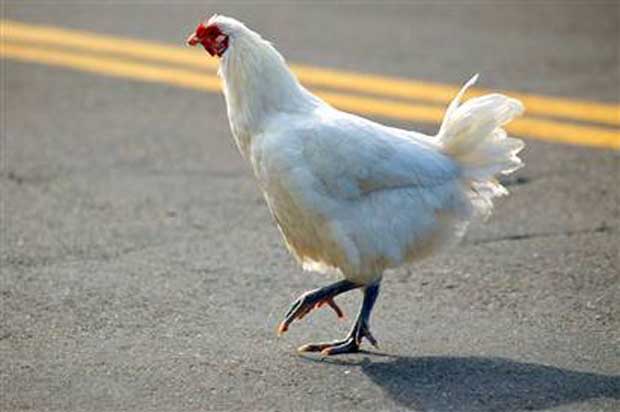 BEING the butt of any joke can be humiliating, and unfortunately for one farmyard-bird it became a lot more than that.

In this one off special interview with WWN, we delve into the world of one Charlotte Jane Chicken, who, in 1961, crossed a road which changed her life forever.

I rang Chicken on the Monday. It was cold and wet outside so I asked her if there was any shelter on the farm where we could conduct the interview, to which she abruptly replied: ‘Yes of course there is. My coop!’

We met the following morning.

She was your average looking chicken: white feathers, blue legs with a bright red comb on the top of her head. She looked nervous sipping her water. The coop was quaint and there was an unusual smell of bird feed in the air. I delicately eased in with my first question.

So Charlotte, what is your favourite ‘chicken crossing the road joke?’

She tilted her head angrily to one side and then pecked at some meal on the ground, making sure to keep one eye on me and one on the feed: ‘Well, if you must know, it has to be the original because not a lot of people get it to be honest.

I asked her to explain.

“When the joke states ‘to get to the other side’ it actually means ‘THE OTHER SIDE, as in death. (She makes tire screeching noise and thud)

“People just think it’s a lame joke when in fact it’s not. It’s quite funny when you think about it.”

How did the joke come about in the first place?

She lit up a cigarette and crossed her legs. I noticed her claws were painted with red nail varnish. I felt strangely aroused.

“The joke started in the early 60’s. My owner at the time, let me out so he could clean my coop.

“I was young and foolish back then and wanted to be free. So I ran. He chased me to the roadside and I just legged it across. I didn’t look to see what was coming and I heard a screech. A car flew over my head missing me with its wheels.

“Then the nightmare began”

Charlotte told me about the years of torment her owner put her, threw by repeating the joke.

“The joke spread to all of his friends and so on. It just took off I suppose.”

“Every day he would say it. Sometimes twice. All I wanted to do was peck the bastards eyes out…..excuse my fowl language.”

But as the saying goes: ‘Be careful what you wish for’

In 1968 the farmer died of a heart attack while cleaning out the chicken coop, leaving Charlotte and her family without any food and water.

“We had no other choice but to eat him. We were going to die. It was survival God damn it. SURVIVAL!!”

“I remember picking at his eyeballs and thinking how ironic life is. Just like the joke about me crossing that stupid road.”

The chicken broke down in tears and started scratching furiously at the ground with her claws. I picked her up to comfort her. She sprayed excrement on my hand and apologised.

Charlotte said she was eventually rescued by the farmer’s nephew who inherited the farm where she still lives today.

She concluded: “I just wish I never crossed that fucking road. It still haunts me to this day”

Suddenly, Ms. chicken just walked away. Her head bopping forward and back like any other chicken. Modest yet confident.

I couldn’t help but feel sorry for her. There were so many traumatic events in her life.

On the way home, I pulled into the KFC car park. It was only then I realised that I was just talking to the most famous chicken that ever lived – the one that crossed the road.