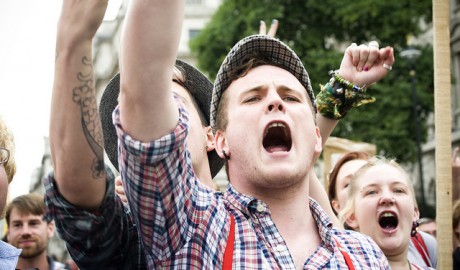 As news spread like wildfire across the world that Facebook is currently unable to allow status updates there were countless scenes of hysteria.

Here in Ireland, Gardaí were called to a disturbing scene in Dublin’s O’Connell street where hundreds of people walked around aimlessly shouting out every inane thought that entered their heads.

WWN was on hand to interview a number of people present at this disturbing scene.

“Where am I supposed to put all my thoughts and observations and stuff,” said Rory Kennedy, a worried student at TCD.

“I’m still wrapping my head around this one, so basically if I’m at home and think something…I can’t like express anymore…the only way I know how…on Facebook?” said a sobbing Sophie Ward, a 21-year-old retail assistant.

In an exclusive interview with WWN, a Gardaí spokesman detailed the extent of the outrage and panic.

“They came out of nowhere, from buildings, buses, cracks in the fecking pavements. One woman just walked up to a baby in a pram and starting shouting ‘€20 for this dress, what a steal’.

And sweet Jesus then there was that big fella who…who…was just talking at the bin, repeating ‘me and my boys going for a few pints tonight, can’t beat it’ over and over. We simply haven’t the manpower to restore order to the streets.”

Social Media expert Davy Foster Jones shared his assessment of the unfolding events: “A great man once said if you take away Facebook from the masses they will go fucking ape shit and as you can see that is what’s happening. Look, just there yer man across the road, he’s just rocking back and forth whispering to himself. If Facebook doesn’t sort this out we could see the end of civil society as we know it.”