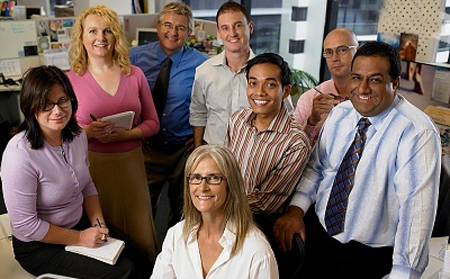 PRODUCTIVITY hit an all time low for one local recruitment office this morning as tens of employees gathered to hear about Marion Kelly’s ‘really strange dream’ she had last night.

The 44-year-old reportedly came into to work ‘in a doozy’ after having one of the most oddly fascinating dreams she has ever had in her whole entire life ever.

It wasn’t long before the out-bound sales representative started explaining to people why she was in such an odd mood this morning.

“Everyone was like: ‘oh! whats up with Marion, she’s not being acting herself since she came in two minutes ago.”

But no one was prepared for what happened next.

Shortly after 10am the mother of none mentioned to fellow co-worker, Paul Moran, that she just happened to have a really strange dream last night.

‘I knew it was going to be a cracker because she hadn’t been herself all morning.’ he said.

Ms. Kelly proceeded to explain the contents of her extraordinary experience to an ever growing crowd of spectators: ‘I remember being in front of my bathroom mirror and suddenly my teeth started falling out. But I wasn’t scared. Then I was in the dentists but it was actually my sitting room.

“Then out of no where there was a  man who looked like my father, but it wasn’t him if you know what I mean. He then gave me a unicorn and we galloped away together into the sunset. So weird!

“I never heard anything like it.” said one man. “What a fascinating dream!”

“I knew she was a bit off when she came in this morning.

“This certainly explains why.” he added.

Marion Kelly later confirmed that she may have forgotten parts of the dream, but told fellow workers that she will write down, in stunning detail,  every single dream she will have in the future.

“We can’t fucking wait.” said everyone.