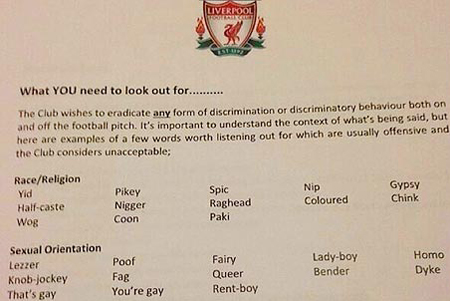 FOOTBALL hooligans from Britain and further a field have thanked Liverpool F.C for providing them with a handy ‘bigotry guide’ of derogatory words and phrases.

The literature was circulated within Anfield to make all staff aware of language unsuitable for use but there have been unintentional consequences.

Terry Craddock, an ardent fan of yelling obscenities in crowded stadiums has admitted the list is now a vital resource: “I reckon I’ll make use of it and that, I’ve been struggling for ways to offend small children and minorities,”

“sometimes my hatred of all things I’m afraid of gets my thoughts muddled up but now all I do is have a check of the list and I can come out with a ‘lady-boy’ or a ‘spaz’ just like that”. he added.

“It’s the 21st century last time I checked and this sort of thing isn’t acceptable. Liverpool should have brought out an app. It’s less cumbersome than an a4 sheet isn’t it? A quick slide of me phone and I could have ‘wog’, ‘tranny’ or ‘chink’ to call on when I want to make people aware of my inability to deal with unresolved childhood issues”.