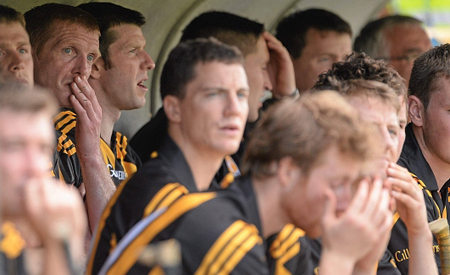 THE NATIONS hurling fans laughed their bollocks off following Kilkenny’s exit from this years championship yesterday afternoon in Semple Stadium, it has been revealed today.

Absolutely every other county GAA follower were said to be ‘in stitches’ shortly after their five point defeat against Cork.

“Ah man, I think myself and the whole pub laughed our heads off for at least three hours last night.” said Tipperary publican Thomas Ahern. “Shefflin being sent off was the icing on the fucking cake.”

“I think we’ll have the game on loop now for at least a month.” he added.

“How many times have we won the championship in the last ten years?” asked a very agitated Coady. “Sure all our supporters were at Springsteen in Nolan Park yesterday, how can you compete with that?”

Several Kilkenny supporters offered their apologies to the team today for not showing up yesterday in the GAA ground in Thurles.

“I just assumed the game was on in Nolan Park because of all the cars.” said 54-year-old Patrick Moran. “It was only at half time when I realised that the music was not the usual pre-match band of young boys playing wind and percussion instruments.”