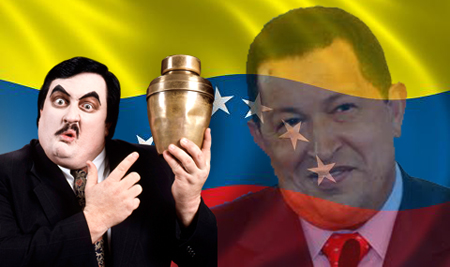 CONSPIRACY THEORIST Jim Corr said today that the deaths of Venezuelan president Hugo Chavez and WWF wrestling manager Paul Bearer were just a little too coincidental, claiming the pair were actually one and the same person.

The  Irish musician and songwriter said there was no way that the timing of the two deaths could be ignored by the masses, and urged his followers to open their eyes and ‘read between the lines’.

“How come no one has ever seen the two men in the same place at the same time?” said Corr on his twitter page earlier. “Chavez’ clever double act was obviously a ingenious plan to infiltrate American culture from within.”

“Hugo Chavez was also 58-years-old and died at the exact same time.” pointed out a very chuffed Corr’s band member.

The chem-trail chaser also added that Paul Bearer made his WWE debut in 1991 as The Undertaker’s manager; exactly the same time as the alleged Mr. Chavez rose to political power.

“Coincidence? I think not.” said Corr outside his home today, wearing a tinfoil hat.

“Applying pale make-up and pulling funny faces may have fooled the rest of the world, but certainly not me!”

Mr. Corr, who operates a conspiracy website about the New World Order, expects that at least one of the funerals will be staged.

“We all know which one that will be.” said Mr Corr, winking and tapping his nose, much to the bemusement of everyone present.