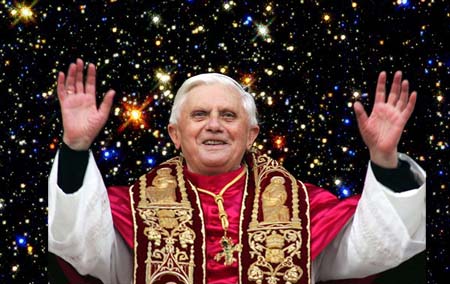 THE POPE has laughed-off sciences latest theory on ‘dark matter’, saying that the idea of an invisible force that holds the entire universe together is an ‘absolute fairytale’.

The Holy see slammed the hypothesis earlier this week and asked people who believed in the idea to ‘get a reality check’.

A spokesman for the Vatican told WWN today that the pontiff regarded such ideals as ‘preposterous’  and urged followers of the Catholic faith to disregard such unrealistic beliefs.

“Science has so far proved no existence of this so-called ‘dark matter’ and yet it holds it to account for the creation of everything in the entire universe.” pope Benidict BMW X5 stated earlier today in Rome.

“These people really need to have their heads checked if they expect the world to listen to such nonsense.” he added.

The idea of Dark Matter was first pondered by Jan Oort in 1932 to account for the orbital velocities of stars in the Milky Way.

Oort believed there was an invisible/subatomic force holding all matter together.

Many believe the popes latest attempt at debunking the theory is slightly hypocrithical considering that the whole Catholic faith is more or less based on this very same concept.

Catholics believe an invisible man in the sky created and pretty much holds the Universe together from a beautiful golden throne in the sky.

However, some out-spoken clergy men agree that dark matter maybe a possibility, but claim the force is obviously the devil in another realm.

Fr. Ciaran Carroll of 23 woodlawn grove, Cork city, who wished to remain anonymous, said: “Yes. Its defiantly the devil. Sure its dark matter isn’t it?”