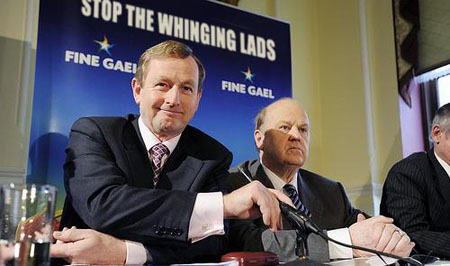 THE Government have asked the country today why it is they are always ‘whinging’ and ‘moaning’ about stuff.

At a press conference in Leinster house earlier, Taoiseach Enda Kenny told the press that both he and labour leader Eamon Gilmore were getting sick and tired of peoples ‘constant nagging’ about important things that they obviously haven’t a clue about.

“The country needs to cop on to itself.” said Mr. Kenny.

“It’s time everyone had a good long look in the mirror at themselves.” he added.

During the forty minute speech the leader slammed critics of the watermeter and household charges.

“So where do you people think we’re gonna get the money to pay back Europe?”

Labour leader Eamon Gilmore described the last year as the toughest in his career and has asked people to just leave the government alone to do its job properly.

“It’s not fair that everyone picks on us.” he said while squeezing Mr. Kennys hand.

“I can’t concentrate when everyone is shouting and screaming about stuff.”

Mr. Glimore added: “If people aren’t happy with this government then they know where the airport is.”

The ‘stop the whinging lads’ campaign ended before any questions could be asked by journalists.

A spokesperson for the government told WWN that there will be no more questions and answer sessions with any member of the Dáil for the foreseeable future.

“The Taoiseach said that TD’s will only start answering questions again when the country stops its constant moaning.”