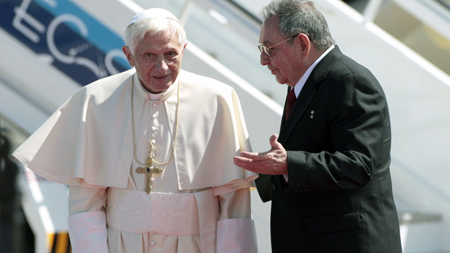 CUBAN authorities laid out the red carpet today for the visiting absolute-monarch of The Vatican City, Pope Benedict XVI – aka The Holy See, aka The Holy Father, aka Joseph Ratzinger.

“We have many funny stories to swap, and some serious ones too.” said President Raul Castro, speaking to the assembled government-approved journalists in Havana.

“The Vatican has led the way on these matters since at least 400 A.D. – and our own fifty-three year old dictatorship will greatly appreciate any lessons learned from those sixteen-hundred years of one-party rule.”

The Pope, 84, infallible, is due to address millions of Cuba’s practising Catholics over the coming days.

During his nationwide tour, it is believed he will extol the virtues of prayer, faith and total ignorance.

Upon arrival at Havana International Airport, the Pope was eager to downplay historical tensions between Catholicism and Communism.

“All that nonsense is in the past. Communism wants equality for all. And we are all equal under the eyes of God,” said the Pope as he emerged from his €300 million gold-encrusted Vatican jet.

“We can do business.”

The Papal visit will also include a trip to some of Cuba’s most effective hard labour camps where thousands of political prisoners spend their life sentences breaking bricks and washing laundry.

“We are very much interested in Cuban laundry techniques,” said the Pope. “In the past we have worked young girls to death in the pursuit of cleaner linen. Unfortunately we have been forced to revaluate our methods – and we are now eager to see how brick breaking can be added to the mix.”

The Pope’s visit will culminate on Wednesday with the beatification of Che Guevara.

“The world has long considered Che Guevara to be a supernatural icon worthy of sainthood,” he added.

“So it’s time we got with the times and beatified his ass.”

Saint Che will be the patron saint of student dormitories.