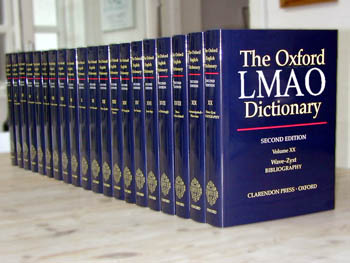 IF you still prefer to write or say a sentence of words rather than abbreviations, you may need to start preparing yourself for the end of an era. They’ve been around for thousands of years, but words may finally become obsolete here by 2035.

At least, that’s the date being proposed by the Oxford University Press (OUP), which publishes the Oxford English Dictionary (OED), as part of an ongoing plan (OP) that aims to modernise the way we speak, read and write(SRW).

The OUP aims to secure agreement on putting the most common phrases and sentences into simple abbreviations and provide easy-to-use (ETU) and efficient alternatives (EA).

It certainly seems that students and scholars across the world will be glad to see the back of long winded words and phrases.

“IAT(Its about time) that the system changed. I am STTT(sick to the teeth) of wasting my breath on common phrases and sentences. This will no doubt cut reading time in half. This will benefit everyone who has to read or write FAL (for a living).” said Dr Phillip Campbell of the OULD (Oxford University Linguistics Department)

Both English and Irish Governments share this view, as evidenced by the increase in organisation abbreviations such as the BNP, CAB, MI6, RUC and IRA.

For many writers, the daunting task of typing common well known phrases can seem frustratingly slow compared to the speed of abbreviated sentences.

For instance, in most European countries, such as GR, LX, SP,  and FR, sentences are rarely used now, while others, such as IT and RM, no longer know how to string a sentence together.

Ireland is still the fourth highest user of sentences in the world on a per capita basis, according to OULD. This means that any phasing out of words (POOW) and sentences here may be a tougher challenge than for other countries. After all, Ireland has always been known as the land of saints and scholars.

The number of words being used in Ireland has fallen since 1999 due to the introduction of the mobile phone and the Internet.

Some people are concerned that abbreviations will ruin the EL and will encourage YP to become even lazier as time goes by.

“This will just get confusing. Eventually no one will know what anyone else is saying. This idea of abbreviating everything is just preposterous.” said the famous Irish fiction writer PROF. J.P.Holden.

Nevertheless, many newspapers here, particularly tabloids like The Sun, The Evening Herald and The Star, no longer use sentences.

The Oxford University Press (OUP) says no decision has been made yet to change the Dictionary, but it does predict a total annihilation of mainstream English by 2035.

A spokesman for the OUP stated that any decision to phase out W&S will only be done by agreement with all the relevant parties involved and not before a proper abbreviated language has been put in place.