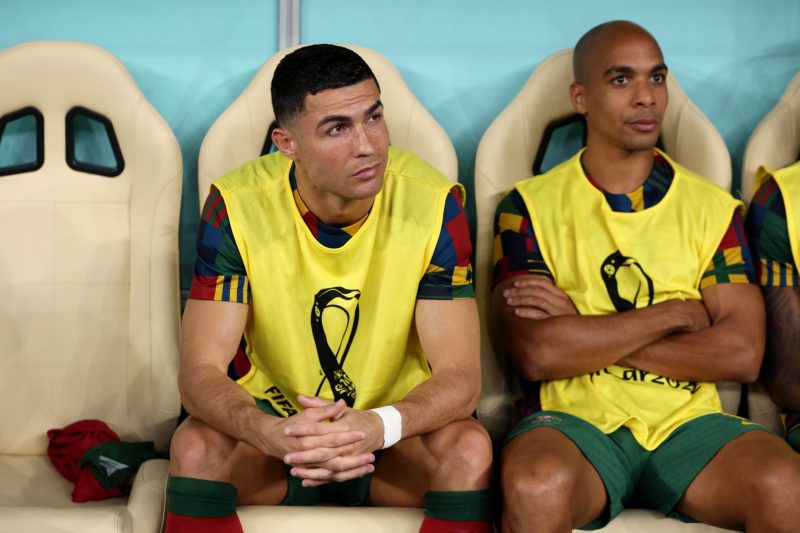 In the evening kick-off Portugal carried out the greatest dismantling since the Berlin Wall came down, administering a 6-1 spanking to Switzerland which left their arses as red as their flag.

Relegated to the bench Ronaldo’s performance as ‘egotistical man trying to pretend like he is cool with this’ was labeled the worst acting performance since Micheal Flatley in Blackbird.

Ronaldo’s replacement Gonzalo Ramos took all of 17 minutes to show why benching Ronaldo was the right idea as he hammered home a goal from an angle tighter than a Cavan man’s wallet.

Now an OAP, Pepe used his bus pass to climb to the top deck and head home Portugal’s 2nd goal from a corner.

Covering more distance than Ryanair, Ramos went on to score a hattrick and convinced every single person on the planet not named Cristiano Ronaldo that he should also start in the quarter finals.

Soon Swiss players were raising their nation’s flag in search of medical help as they were run over more times than a dead cat on a motorway.

In the other game of the day there was an upset more historic than a Leaving Cert history book.

Going forward Spain’s tiki-tactics need a rethink. With over 1,000 passes and just one shot on target Enrique’s side were less efficient than a turf powered airplane.

Spain’s failure to score can be explained by the fact they were under a witches curse making it impossible for players to do anything but make short, back and forth passes to one another.

Elsewhere, FIFA have said they will address safety concerns which somehow saw the entire population of Morocco fitting into the stadium.

There were many heroic performances in the game with Morocco’s midfield colossus Amrabat displaying a work rate more productive than Chinese children in an Apple factory.

Moroccan Bono is best Bono, Saiss bravely played on after his hamstring was declared dead, and Chelsea fans couldn’t help but watch the performance of Ziyech and think their club should sign that guy.

Before penalties Spain had a chance to win with the last kick of the game as Sarrabia’s shot gave the post a closer shave than a Gillette Mach 12.

Sarrabia proved once again one of the most inevitable laws of football; a sub brought on right before the end of extra-time to take a penalty will always miss that penalty.

From the moment Simon dived away from Morocco’s first penalty like it was turbo herpes with a side of scurvy, it always looked like it was Morocco’s moment.

With Hakimi’s dink Morocco were through to their first ever World Cup quarter finals, sparking wild scenes not witnessed since that one time Ireland accidentally legalised drugs for 24 hours.